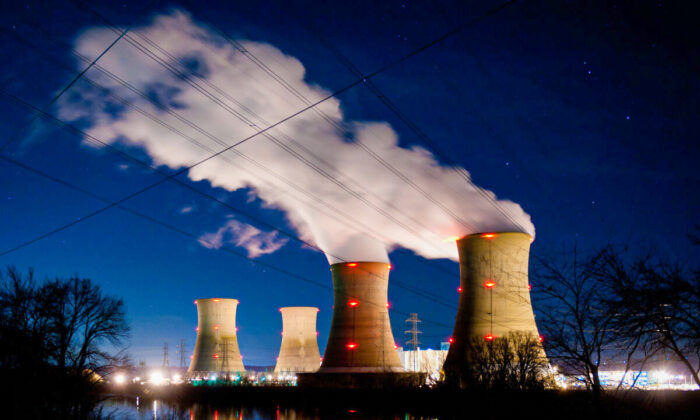 The Three Mile Island Nuclear Plant is seen in the early morning hours of March 28, 2011 in Middletown, Pa. (Jeff Fusco/Getty Images)
US

Talk of nuclear war has been putting many people on high alert since the Russian invasion of Ukraine in February, causing potassium iodide tablet sales to skyrocket.

At least one supplier Anbex reports it is currently out of stock though a new supply of IOSAT Potassium Iodide in 130mg and 65mg doses is expected in April.

The product is billed as the “only full-strength radio-protective KI [potassium iodide] tablet that has been approved by the FDA and passed all requirements for purity, quality, safety, and efficacy. For use by adults and children in a radiation emergency.”

SERB/BTG/Veriton Specialty Pharmaceuticals, maker of FDA-approved ThyroSafe, also has seen a large and sudden increase in demand for its potassium iodide products globally—and especially in Europe and the United States.

“This has coincided with the conflict in Ukraine. I believe news of fighting around Chernobyl and the Zaporizhzhia nuclear power plant contributed to the heightened interest,” said Chris Sampson, director of corporate communications in the United Kingdom.

“We have not been out of stock, but given the sudden demand and interest in the product, we are working hard to allocate stock and manage demand from our customers and partners globally,” Sampson told The Epoch Times.

Sampson said his company temporarily stopped orders through its website due to the “unusually high volume of orders.”

“We are working closely with our suppliers to accelerate the manufacturing of additional batches and to increase manufacturing capacity so that we can continue to meet demand,” Sampson said.

“It’s very important that people understand they should only take potassium iodide tablets when public officials say to. Taking tablets earlier or more often than public officials recommend is not helpful and can increase the chances of side effects.”

Sampson said, “in most, but not all, European countries,” potassium iodide is kept in national stockpiles.

“So in Europe, we have prioritized supplying governments, public health agencies, and militaries who manage stockpiles,” he said.

According to the U.S. Nuclear Regulatory Commission, potassium iodide offers special protection in a radiological emergency such as the nuclear reactor meltdown at Three Mile Island on March 28, 1979, and the Chernobyl disaster on April 26, 1986.

“Potassium iodide protects the thyroid gland against internal uptake of radio iodines that may be released in the unlikely event of a nuclear reactor accident.

“The purpose of radiological emergency preparedness is to protect people from the effects of radiation exposure after an accident at a nuclear power plant,” the NRC said on its website.

When potassium iodide is swallowed, it is absorbed by the thyroid gland. In the proper dosage, it can prevent the accumulation of radioactive iodines in the thyroid gland, which can lead to thyroid cancer and other health issues.

Jim Small, a U.S. consultant for SERB/BTG/Veriton, said the increasing demand for ThyroSafe has already surpassed “exponentially” the number of units sold during a weeklong panic following the Fukushima Daiichi nuclear power plant disaster in Japan on March 11, 2011.

“I haven’t seen anything like it before,” Small told The Epoch Times. “Already, we’ve had the potential of a nuclear threat from the Ukraine”—a threat that has yet to abate.

Small said a number of online distributors of Thyrosafe currently serve the “prepper” community in the United States, where demand has been high since the Russia-Ukraine war erupted on Feb. 24.

“Many are aware that something can be done [before a nuclear disaster]. If an event has already occurred, it’s probably too late to get [potassium iodide tablets]. This is the product that everybody doesn’t want until everybody needs it,” Small said.