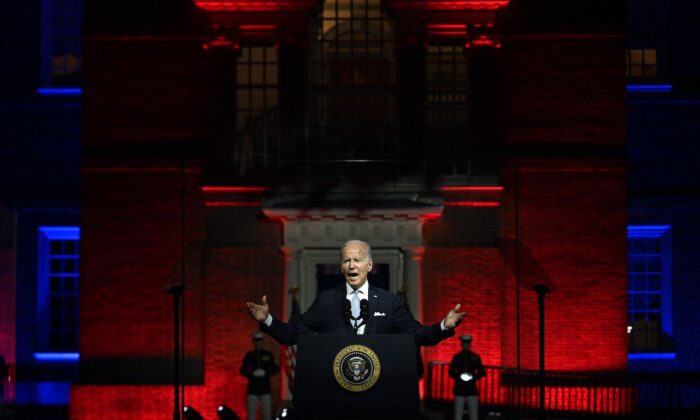 Governments use the fear of imminent danger to expand their own power and to impose their own policies on skeptical populations. This kind of apocalyptic alarmism keeps some people in a permanent state of anxiety that threatens their health and mental health.

A strange aspect of the current midterm election season is that the incumbent party’s campaign themes—the alleged threat to democracy and abortion “rights”—are urgent and alarmist but have little to do with voters’ main concerns: the economy and inflation. Most voters, a new poll showed, do see a threat to democracy but see it as coming from the media or the Democrats, not MAGA Republicans.

Fascism and the Threat to Democracy

A major strategy of Democratic campaigning has been to focus on the threat to democracy posed in their view by the Republicans. The idea was to make the Jan. 6 riot central to their campaign and demonize “MAGA Republicans” or at times the whole Republican Party. In his Sept. 1 speech to a rally in front of Independence Hall in Philadelphia, Biden called his opponents “semi-fascist.” The rally itself was a sinister event in fascist style with the president waving his arms about and shouting as if imitating the Italian fascist Benito Mussolini. With two uniformed Marines standing behind him, Biden insulted half the population in terms unprecedented in American history.

The suggestion, sometimes explicit, is that the election of any Republican to any position is itself a threat to democracy. We need, it seems, an indefinite period of one-party rule to save democracy from itself.

Do Democrats believe what they say about Republicans being fascist or semi-fascists, an imminent danger to democracy? Some commentators such as Norman Podhoretz of Commentary think they do, but then find it odd that they are so incurious about their own role in undermining democratic republicanism. Are not liberal efforts to delegitimize the Supreme Court, to supplant or ignore the constitutional power and the authority of the legislative branch attacks on constitutional democracy?

As Podhoretz says, “The most blatant example in American history of this attack [on the Constitutional order] and this acquiescence [of the legislative branch] came in August, when President Biden announced he was using an executive order to retire student-loan debt for as many as 60 million Americans at a cost estimated to be between $500 billion and $1 trillion.” As he says, this is money that Congress did not appropriate or authorize.

Do Democrats Actually Believe It?

Democrats and their supporters in the media present themselves as defending democracy. Voters do not believe it. It’s the Democrats who slur their opponents as fascists while seeking a one-party state.

Charles Cooke of National Review argues that Democrats themselves show through their actions that they don’t believe their own rhetoric. They don’t really believe that democracy is at stake in the midterm elections.

It was Hillary Clinton who rejected her 2016 electoral loss to Donald Trump. Jimmy Carter called the duly elected Trump an illegitimate president. Stacey Abrams pretended that she won the 2018 Georgia gubernatorial election and has been endorsed in this by leading Democrats such as Clinton, Elizabeth Warren, Cory Booker, and Eric Holder.

A Democratic Party that believed American democracy was on the line, argues Cooke, “would have moderated politically, culturally, and fiscally” but has not done so. They would have sacrificed or postponed some of their extreme ideological agenda in order to address the economic crisis that has caused their decline in the polls. They would not have allowed the Democratic president to commit a series of impeachable offenses months before the midterm elections. The party would not, while slurring its opponents as fascists, “have consciously elevated the candidates it now casts as existential threats in the hope that they’d be easier to beat on Election Day.”

Several commentators have drawn similar contrasts between what Democrats say they believe and the way they act. Lance Morrow in the Wall Street Journal argued in relation to Biden’s “semi-fascist” speech:

“If there are fascists in America these days, they are apt to be found among the tribes of the left. They are Mr. Biden and his people (including the lion’s share of the media), whose opinions have, since Jan. 6, 2021, hardened into absolute faith that any party or political belief system except their own is illegitimate—impermissible, inhuman, monstrous and (a nice touch) a threat to democracy. The evolution of their overprivileged emotions—their sentimentality gone fanatic—has led them, in 2022, to embrace Mussolini’s formula: ‘All within the state, nothing outside the state, nothing against the state.’ Or against the party. (People forget, if they ever knew it, that both Hitler and Mussolini began as socialists). The state and the Democratic Party must speak and act as one, suppressing all dissent.”

The term fascism, as Bruce Kuklick (quoted by John Wilson) says in his forthcoming book, “Fascism Comes to America: A Century of Obsession in Politics and Culture,” “expresses loathing more than it identifies a reality or a growing sense of realities.”

It doesn’t describe either main party in the United States, but it’s a powerful slur. A president who sought, as Biden’s apologists presented him in the 2020 election campaign, to unite and calm the stormy waters of partisan hostility, would not have used the term. That healing and uniting stance didn’t survive his first day in office.

In terms of commitment to economic, political, and cultural freedom, there’s a marked difference in the parties. Democrats lean more strongly toward totalitarianism, looking to a stronger state, with more control over the rest of society—family, education, economy, faith-based and other civil organizations—and less tolerance of ideological difference and diversity, including political beliefs other than their own. That is the collectivist ideology of corporatism embraced by Mussolini, in which the economy was managed by state officials by integrating large interest groups under the state.

As for street violence and bullying, with which the Italian Fascists are often associated, neither the Democratic nor the Republican Party engages in it, though there are violent elements on the fringes of both—as we saw with the months of rioting, arson, and violence associated with the Black Lives Matter movement in 2020, as well as in doxing and assassination attempts targeting Republican legislators and justices of the Supreme Court.