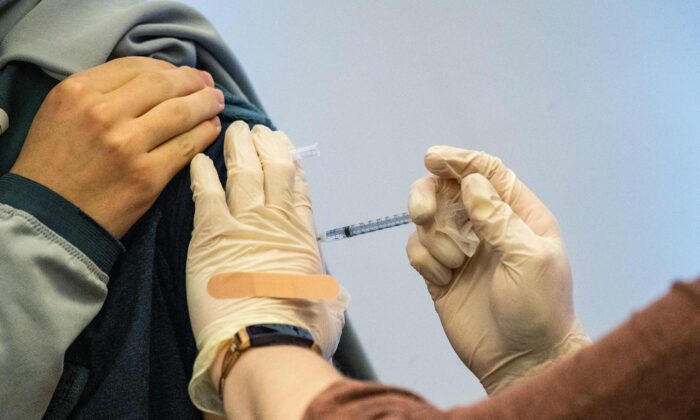 A child gets a Pfizer COVID-19 vaccine in Hartford, Conn., on Jan. 6, 2022. (Joseph Prezioso/AFP via Getty Images)
Vaccines & Safety

The data from the trial shows it is effective “in preventing COVID-19 in the age group of 6 months through 4 years,” FDA scientists said in a brief (pdf) filed with its vaccine advisory panel.

Additionally, the data “will likely have a beneficial effect” on hospitalization and death, the scientists alleged.

The FDA is signaling that it will grant the request for emergency use authorization from Pfizer and BioNTech, which made the vaccine together.

Pfizer’s vaccine is the only one available to children in the United States. The company is seeking to expand that availability to kids as young as 6 months old.

The increased dosage met the primary endpoint, which was a certain level of neutralizing antibodies accepted as a marker of protection against the CCP (Chinese Communist Party) virus. Also known as SARS-CoV-2, the virus causes COVID-19.

While Moderna’s vaccine, also up for emergency clearance for children, did not perform well against infection, Pfizer’s did, with an estimated efficacy of 80 percent.

However, more children in the vaccinated arm in Pfizer’s trial contracted severe cases of COVID-19 when compared to the unvaccinated arm.

“Among all COVID-19 cases accrued from Dose 1 through the data cutoff of April 29, 2022, 1 placebo recipient 6-23 months of age and 7 participants 2-4 years of age (6 BNT162b2 recipients and 1 placebo recipient) met the protocol-specified criteria for severe COVID-19 during both blinded and open-label follow-up,” FDA scientists said in the new document.

Additionally, the only child that required hospitalization had received the vaccine.

Regulators attempted to downplay the cases, saying that all but one met the severe case criteria “based on vital sign findings that were not clinically significant in the opinion of the investigator and FDA.” Agency scientists then said the vaccine would “will likely have a beneficial effect” on hospitalization and death. They also said the safety data raised no new concerns.

The efficacy data was based on just 363 child participants. The safety data came from approximately 3,000 volunteers.

The document was filed two days before the FDA and Pfizer will make presentations to the Vaccines and Related Biological Products Advisory Committee, a panel that advises the FDA on vaccines.

“I cannot believe that this committee would even recommend authorization with this sort of data,” Kim Witczak, who heads the drug safety advocacy group Woody Matters and sits on another FDA advisory panel, told The Epoch Times after reviewing the documents that have been submitted to the panel.

Witczak is among those who dislike how the FDA allowed the drug makers to use immunobridging, or a level of antibodies, as the main endpoints of the trials, versus clinical efficacy. She also believes the COVID-19 emergency is over, which would mean the agency cannot grant emergency use authorization. And she noted that Pfizer again unblinded trial participants, or notified the placebo group that they could get a vaccine, which undermines the study results.

FDA scientists did say there were uncertainties pertaining to the vaccines, including the durability of the protection they afford. The scientists said a third Moderna shot and a fourth Pfizer shot would “likely” be required to boost the effectiveness after it wanes, which has happened in older age groups. And the agency’s analysis noted that the risk of post-vaccination heart inflammation, a condition that was not detected in the original trials, “is unknown” for young children.

The FDA’s advisory panel will either advise or not advise the FDA to authorize the Pfizer and Moderna vaccines. The FDA can ignore the recommendations.

If the FDA does authorize one or both of the shots, the Centers for Disease Control and Prevention will decide whether to recommend the vaccines for children.

The White House has said that the vaccines could be administered to young children as early as the week of June 20.