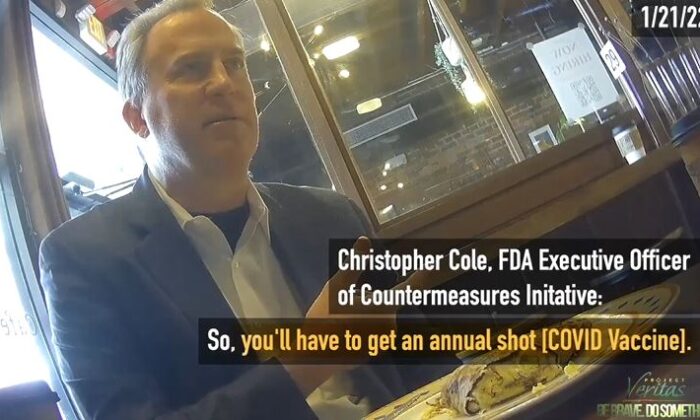 In this still image from undercover video footage, Christopher Cole, an executive officer at the Food and Drug Administration, speaks about vaccines. (Courtesy of Project Veritas)
By Zachary Stieber

Christopher Cole, executive officer of the medical countermeasures initiative at the FDA, made the comments to the journalism group Project Veritas.

“Biden wants to inoculate as many people as possible,” Cole told an undercover reporter with the group. “You’ll have to get an annual shot. I mean, it hasn’t been formally announced yet because they don’t want to rile everyone up,” he said.

Cole said that drug, food, and vaccine companies “pay us hundreds of millions of dollars a year to hire and keep the reviewers to approve their products.”

He also said that annual shots would become “a recurring fountain of revenue” for the vaccine makers, referring to them as Big Pharma.

“It might not be that much initially, but it’ll be recurring—if they can get every person requiring an annual vaccine, that is a recurring return of money going into their company,” he added.

Cole didn’t respond to requests for comment, including an email, a LinkedIn message, and a voicemail at his office.

An FDA spokesperson told The Epoch Times in an email, “The person purportedly in the video does not work on vaccine matters and does not represent the views of the FDA.” The spokesperson didn’t respond to a followup question.

Cole later told Project Veritas that he is a manager in an office of the FDA that does not work on vaccines but that does help “oversee the approval of the COVID vaccines for emergency approval.”

Cole said his comments about having to get a COVID-19 vaccine annually was a comparison to how many Americans get a flu shot every year.

He also confirmed that he believes the FDA will ultimately grant emergency authorization for at least one vaccine for toddlers—the FDA delayed its decision on that front on Feb. 11—and that he is not in communication with the president, but “from what he’s said, he probably wants to inoculate more people than not.”

Cole said he was on a date when he made the remarks.

The White House did not respond to a request for comment and White House press secretary Jen Psaki didn’t address the matter during a briefing on Wednesday.

Biden and his administration have pushed virtually every American to get vaccinated, asserting its the best protection against COVID-19. They’ve also downplayed natural immunity, or protection enjoyed by people who recover from COVID-19, drawing criticism from some experts.

Dr. Robert Malone, who helped create the technology the Moderna and Pfizer vaccines are built on, described the Project Veritas video as a “smoking gun.”

“What we have is an agency that has been completely distorted by the huge amounts of capital that await all their employees once they leave their agency,” he said on Steve Bannon’s show. “They have a strong incentive to behave in these ways, to do whatever’s necessary to comport with the interests of Big Pharma, and now you’ve got a smoking gun, thanks to Project Veritas.”