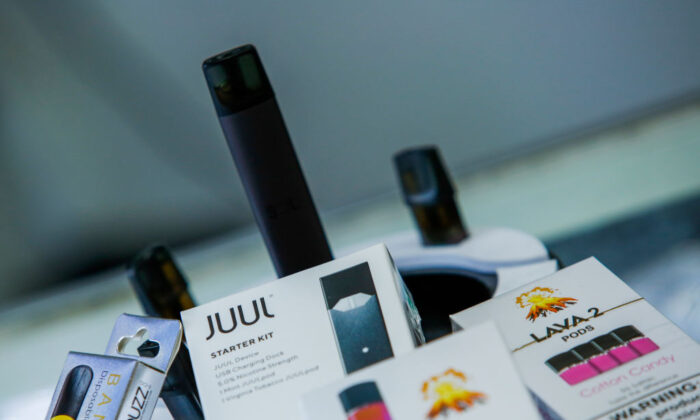 The Food and Drugs Administration (FDA) banned all of JUUL Labs Inc’s products on June 23 from the market, delivering a blow to the popular e-cigarette company.

“Today’s action is further progress on the FDA’s commitment to ensuring that all e-cigarette and electronic nicotine delivery system products currently being marketed to consumers meet our public health standards,” said FDA Commissioner Robert M. Califf in a news release.

According to the FDA, they found that JUUL’s application submitted over two years ago “lacked sufficient evidence” regarding the toxicology levels of the products, in particular, some of the evidence was found to be “insufficient and conflicting,” including those regarding the genotoxicity and potentially harmful chemicals in the company’s e-liquid pods.

The FDA said that they have “dedicated significant resources,” to review most of JUUL’s products on the American market, and believe that a significant proportion of the products “have played a disproportionate role in the rise in youth vaping.”

The American e-cigarette company, JUUL told The Epoch Times that they “respectfully disagree with the FDA’s findings and decision.”

According to the company’s email statement, JUUL continues to believe that the company has provided “sufficient information and data based on high-quality research to address all issues raised by the agency.”

They believe their application submitted over two years ago, “appropriately characterized the toxicological profile of JUUL products, including comparisons to combustible cigarettes and other vapor products, and believe this data, along with the totality of the evidence, meets the statutory standard of being ‘appropriate for the protection of the public health.’”

JUUL on its website mostly markets itself as an alternative for tobacco smoking consumers aged 21 and older. Purchases from the website require detailed personal information to deter access of adolescents and also limits customers to two JUUL vaping devices and 15 packs per month. The website displays anecdotal testimonies of its users who have given up cigarette smoking since taking up the e-cigarette.

The company is currently seeking alternatives to keep its products on the market, including appealing the decision against the FDA.

The American Lung Association applauded the FDA’s order on Thursday as “long overdue and most welcome,” and commended the “FDA for following the science and denying Juul the ability to sell its products.”

The health association blamed JUUL for being “largely responsible” for the youth vaping epidemic, alleging that the company used the “same tactics as major cigarette companies to prey on youth,” such as using flavors and price discounts and youth-focused market campaigns.

However, there are also significant numbers of voices dissenting the order. Guy Bentley, the director of consumer freedom at the Reason Foundation, is one of the dissenting voices.

“By banning the most effective and popular e-cig on the market, there’s no doubt FDA’s choice will force a portion of current Juul users to go back to smoking, and an unknown number of smokers to never make the healthier switch to vaping,” he wrote in a retweet of an article announcing the decision.

The swift market takedown of JUUL comes two days after the Biden administration’s proposal to remove nicotine in most cigarettes.

On Tuesday, the Department of Health and Human Services published a brief, outlining plans to set a lower ceiling for nicotine levels in cigarettes and other similar products.

The proposal, outlined in a brief agenda by the Department of Health and Human Services (HHS), would establish a lower ceiling for nicotine levels in cigarettes and some similar products.

“Because tobacco-related harms primarily result from addiction to products that repeatedly expose users to toxins, FDA would take this action to reduce addictiveness to certain tobacco products, thus giving addicted users a greater ability to quit. This product standard would also help to prevent experimenters (mainly youth) from initiating regular use, and, therefore, from becoming regular smokers,” officials with the FDA, stated in the agenda.

On the same day, the American Heart Association released a study, calling for action on increased e-cigarette use among adolescents, outlining potential long-term impacts on lungs, cardiovascular system, and mental health.

Altria, a large cigarette maker, told media outlets that the FDA’s announcement “marks the start of a long-term process, which must be science-based and account for potentially serious unintended consequences.”