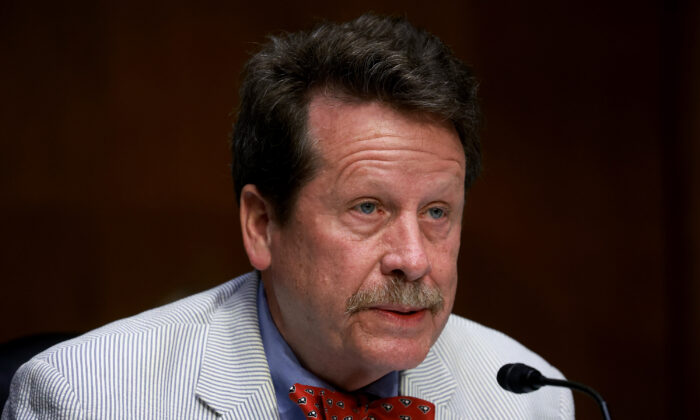 U.S. drug regulators on Dec. 8 announced emergency clearance for two COVID-19 vaccines for children as young as 6 months of age.

The updated vaccines from Pfizer and Moderna are now able to be administered to younger children after previously only being available to those 5 years of age and older, the U.S. Food and Drug Administration (FDA) said.

Justifying their decision, officials claimed that the vaccines protect against severe illness and hospitalization.

“As this virus has changed, and immunity from previous COVID-19 vaccination wanes, the more people who keep up to date on COVID-19 vaccinations, the more benefit there will be for individuals, families, and public health by helping prevent severe illnesses, hospitalizations, and deaths,” FDA Commissioner Dr. Robert Califf said in a statement.

There’s no clinical efficacy data for the updated vaccines. Regulators relied on data from mice and from a different set of updated vaccines when initially authorizing them in the fall, and said safety data was from the old vaccines.

“How can any doctor look at parents and insist this is ‘safe’ for their babies when it was never tested on people?” Kim Witczak, a drug safety advocate, wrote on Twitter.

The only effectiveness estimates, drawn from real-world settings by the U.S. Centers for Disease Control and Protection, found that protection against symptomatic disease was subpar, particularly for younger people.

And multiple studies that measured the response triggered by the updated vaccines found they perform poorly against the rising variants in circulation, including BQ1.1.

Dr. Harvey Risch, professor emeritus of epidemiology at the Yale School of Public Health, told The Epoch Times that the original vaccines, much less the largely untested new ones, shouldn’t have been authorized for young children in the first place.

He noted that BA.4 and BA.5 have either disappeared from the United States or are on the downslope while newer variants are becoming dominant.

In their letters to the vaccine manufacturers amending emergency use authorizations for the bivalents, regulators were more cautious with their language.

The authorizations are for the prevention of COVID-19. Risks include side effects such as heart inflammation and Bell’s palsy.

The FDA, continuing a growing trend, didn’t consult with its vaccine advisory panel before issuing the new authorizations.

Both Moderna and Pfizer celebrated the new development.

“With the FDA’s decision, children and adolescents of all age groups in the U.S. will now be eligible for our updated bivalent COVID-19 booster, providing families with an important protective tool as we continue through the winter months,” Moderna CEO Stéphane Bancel said in a statement. “We appreciate the FDA’s timely review.”

The CDC must decide whether all children in the youngest age group should get the updated vaccines. The public health agency has never diverged from the FDA during the pandemic.

Pediatricians and others have already been able to preorder the bivalents, enabling them to be shipped soon.

“There will be a sufficient but finite supply of pediatric bivalent COVID-19 vaccines for these age groups, which should be directed to providers with expected demand among eligible patients,” the CDC stated in an operational planning guide.

The projected demand isn’t clear, as many parents have opted against getting their babies and toddlers vaccinated.

The FDA said it would consider authorizing another dose of the new vaccine as a booster for children who receive Pfizer.

“The data to support giving an updated bivalent booster dose for these children are expected in January,” the FDA stated. “The agency is committed to evaluating those data as quickly as possible.”