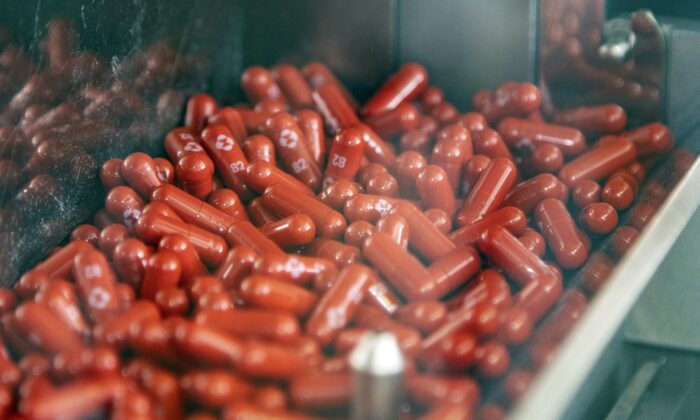 Merck's antiviral pill against COVID-19 is seen in an undated photograph. (Merck via AP)
AMERICA

The Food and Drug Administration (FDA) on Thursday morning issued an emergency use authorization for Merck’s antiviral pill for COVID-19, more than 12 hours after giving the green light for a similar, oral drug made by Pfizer.

Merck’s drug, named molnupiravir, was developed with Ridgeback Biotherapeutics, and it was shown to reduce hospitalizations and deaths from 9.7 percent to 6.8 percent in clinical trials of high-risk individuals, according to the federal drug regulator.

The medication is designed to treat adults who are at a high risk of becoming severely ill from COVID-19, the illness caused by the CCP (Chinese Communist Party) virus. The oral drug can also be used in the treatment of mild-to-moderate COVID-19 cases in adults and for whom alternative COVID-19 treatments are not accessible or aren’t clinically appropriate, the agency said.

“As new variants of the virus continue to emerge, it is crucial to expand the country’s arsenal of COVID-19 therapies using emergency use authorization,” Patrizia Cavazzoni, director of the FDA’s Center for Drug Evaluation and Research, said in a statement.

And Thursday’s emergency use authorization “provides an additional treatment option against the COVID-19 virus in the form of a pill that can be taken orally,” Cavazzoni continued in her statement.

On Nov. 30, the FDA’s advisory panel narrowly voted 13–10 to recommend the drug amid concerns about its effectiveness and safety. The drug cannot be authorized for use in patients under the age of 18 because molnupiravir might impact bone and cartilage growth, according to the FDA.

Possible side effects of the pill include diarrhea, nausea, and dizziness, the FDA said. The agency’s advisory committee last month referenced concerns about whether the drug presents a potential risk to pregnant women and their unborn children.

Authorities said that an advantage of Pfizer’s and Merck’s oral drugs is that they can be taken at home and do not require an injection or IV at a medical clinic or hospital.

The U.S. federal government previously agreed to purchase 3.1 million courses of the Merck antiviral drug for about $2.2 billion. Jeff Zients, the White House’s COVID-19 response coordinator, told reporters Wednesday that if molnupiravir is authorized, most of those treatment regimens could be distributed to states and municipalities by the end of next month.

As for Pfizer’s drug, Paxlovid, the United States purchased 10 million courses several weeks ago in a deal worth more than $5 billion, according to a Department of Health and Human Services news release.

The drug, which was authorized by the FDA for emergency use, is taken twice per day for five days in combination with a second medicine called ritonavir, classified as a generic antiviral drug. It is aimed at COVID-19 patients with “mild-to-moderate” symptoms to prevent them from becoming so sick that they need to be hospitalized, FDA officials and Pfizer have said.

Before the FDA decisions this week, the only COVID-19 antiviral treatment that had been granted emergency authorization by the FDA is remdesivir, a drug that’s being sold under the brand name Veklury.

In recent months, some severely sick COVID-19 patients and their family members have said that the cheaply produced anti-parasitic drug ivermectin produced positive results. An elderly patient in Illinois recovered following a court order that allowed him to use the medication, which the FDA hasn’t cleared for use for COVID-19, the man’s attorney said on Dec. 1.

Merck has not responded to a request for comment.