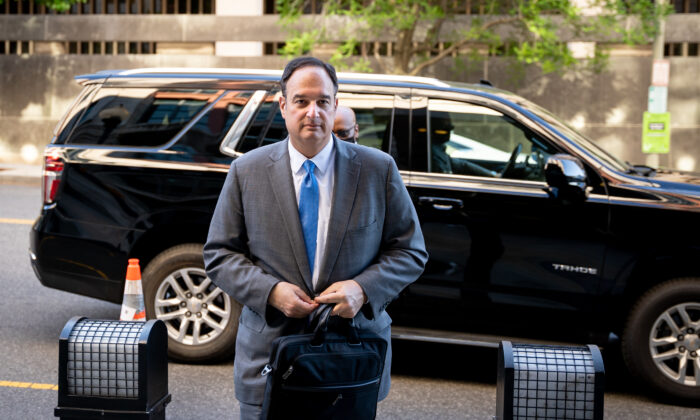 The way the FBI investigated allegations of a secret backchannel between The Trump Organization and Russia-based Alfa-Bank was peculiar in several regards, according to a former FBI agent.

A number of FBI agents and officials took steps that effectively shielded from scrutiny the source of the allegation: operatives tied to the Clinton campaign, according to information that came out during the trial of Michael Sussmann, a lawyer who fed the allegation to the FBI in 2016 while on the campaign’s payroll.

Field agents probing the veracity of the allegation were kept in the dark by their supervisors about its source and prevented from taking steps to seek out and talk to the sources. The field agents found the allegation to be unsubstantiated.

Sussmann obtained the data used to animate the allegation from his client at the time, tech executive Rodney Joffe, who later said he was “tentatively” offered a high-level position in a prospective Clinton administration. Joffe, Sussmann, and others created documents to build a narrative around the data to make the allegation look plausible.

Joffe was an FBI informant at the time, which means he had a handler assigned at the bureau to whom he was supposed to pass any information he had to provide. He didn’t go to his handler, however. Instead, he and Sussmann used personal connections to push the allegation into the bureau.

Keeping Joffe’s name secret, Sussmann gave the information to James Baker, who was the FBI’s top lawyer at the time. Sussmann said he wasn’t representing any client, presenting himself as a good samaritan there to help the FBI. For that, he’s being charged with lying to the government. He has pleaded not guilty and awaits a jury verdict upon the conclusion of his trial.

Based on court documents, Baker and possibly others seemed accepting of Sussmann’s supposedly altruistic motive, but it appeared questionable to Marc Ruskin, who spent some 30 years at the FBI in various field and supervisory roles.

During his career, he’s only encountered one source that genuinely helped as a good samaritan, he told The Epoch Times. Usually, informants pursue their own agendas, be it getting paid, lessening their own legal troubles, or damaging rivals.

In any case, agents should examine the source’s motive, he said.

Baker passed on the information to the highest echelons of the FBI, including then-Director James Comey; his deputy, Andrew McCabe; and then-head of counterintelligence Bill Priestap. The top brass, including Comey, was “fired up” about the allegation and insisted a full investigation be opened, even though the FBI cyber division dismissed the allegation as bogus within a day, according to court documents.

There’s nothing inappropriate for the FBI leadership to order agents to open an investigation, Ruskin said.

“What seems unusual to me is that there would be a push to open an investigation where the information has already been questioned.”

Even if the officials were within their right to demand further investigation, he would have at least expected the Cyber Division’s conclusion to attach a question mark to the validity of the allegation.

The investigation was opened by the FBI Chicago Field Office, with agent Ryan Gaynor serving as a go-between with the agency’s headquarters in Washington.

Gaynor testified that he didn’t initially know the information was provided by Sussmann, and even after he learned it, he didn’t reveal to the field agents in Chicago Sussmann’s name or that the source had ties to the Democratic Party. He said the investigation was designated as “close hold” to conceal the source’s identity.

But unless such a “close hold” is some new practice at the bureau, it doesn’t appear to be a formal designation.

“It’s not something I’ve ever run across,” Ruskin said.

It could be that a source is so sensitive that its identity would only be shared on a “need-to-know” basis, he said. That would apply in some extraordinary circumstances, such as when the source is a high-level politician or perhaps somebody whose life would be in imminent danger if revealed.

None of that seems to apply to Sussmann or Joffe, who had no qualms spreading the Trump–Russia claims to the media at the same time that they pushed them to the FBI.

It could be argued that Sussmann’s association with the Clinton campaign would trip the FBI policy of not interfering with elections and his name was withheld for that reason.

“I’m not sure how much sense that would make,” Ruskin said.

The field agents in fact requested the identity of the source and wanted to interview him, but were denied, one of the agents, Allison Sands, testified.

“That’s pretty unusual,” Ruskin said. “I’m not familiar with any similar situation where agents were told they didn’t have a right to know, at least not without some explanation. Even if it’s being restricted, there’s no reason why the case agent in Chicago couldn’t be called in and be briefed by somebody who does know.”

Gaynor said he worried that the field agents would be biased against the information if they knew it came from a lawyer affiliated with the Democratic Party. He also said he decided that it wasn’t necessary to tell the agents because even if they knew, they couldn’t go interview Sussmann because of the FBI policy of not interfering with elections.

Ruskin questioned how credible the invocation of the election interference policy was, given that the FBI was at the same time taking investigative steps against the Trump campaign and people affiliated with it.

In any case, it wasn’t up to Gaynor to make that call, Ruskin said.

“It would be up to his bosses to decide something that important.”

As for bias, “not providing information out of a fear that the recipient would be biased, I would say, is not an adequate reason,” he said, explaining that agents are required to be impartial and that their supervisors can’t just presume they are biased.

Even if Gaynor refused to provide the name, the field agent could try other avenues, such as talking to her supervisor in Chicago, who would then contact the higher brass at headquarters, going over Gaynor’s head. It’s not clear whether Sands made such an attempt.

Days after Sussmann met with Baker, Joffe contacted FBI agent Thomas Grasso, whom he knew from his previous work with the bureau. He gave him additional information about the allegation and informed him that the FBI was already investigating it. He also asked for anonymity.

Even though Grasso wasn’t Joffe’s handler, there’s no formal rule against an informant providing information to a different agent, Ruskin said.

The importance of working through the handler is to make sure that the FBI has a record of the informant’s interaction with the bureau, allowing agents to evaluate the informant’s quality and behavior.

Yet Grasso testified that he didn’t contact Joffe’s handler at all.

“That would certainly be an unusual situation,” Ruskin said, noting that he would want to know why.

It was still more unusual that Grasso agreed to honor Joffe’s request for anonymity.

“Normally, people would say, ‘Who told you? Where did you get it?’” Ruskin said. “Normally, reporting information without providing its source doesn’t have much value.”

The veil of anonymity allowed Joffe to make it look as though he had nothing to do with the allegation’s origin or how it reached the FBI in the first place. He was even able to vouch to the bureau that the allegation was plausible, as if independently evaluating it.

“Ever heard of circular reporting?” Andrew DeFilippis, one of the prosecutors in the Sussmann case, asked Grasso on the stand.

“Yes. As I understand it, I would tell you something, and you would report out back to me,” replied Grasso, now retired.

DeFilippis said, “Ever seen a situation where individuals try to put information into different parts of the FBI to make it look like it is coming from different places at the same time?”