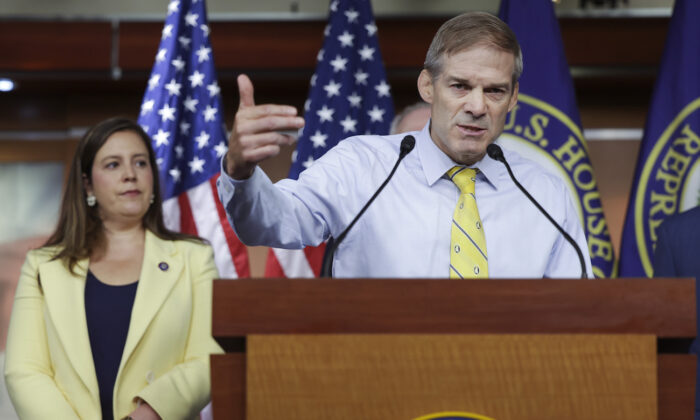 Rep. Jim Jordan (R-Ohio) revealed Wednesday he received information from an FBI whistleblower accusing the bureau of labeling a veteran-led group and others as domestic terrorist organizations after they were found not to be a threat.

In a letter (pdf) to FBI Director Christopher Wray, Jordan wrote that a whistleblower said the FBI labeled American Contingency as a “domestic violent extremis[t]” organization despite the bureau clearing it in 2020.

The “domestic violent extremism” designation against American Contingency “is striking in light of new whistleblower disclosures that show that the FBI had concluded as recently as 2020 that the group was not a threat,” Jordan wrote.

“A background investigation and review of Glover’s social media failed to support the allegation that Glover is a threat to the United States or its citizens,” the letter continued.

The FBI, in a statement to The Epoch Times, disputed Jordan’s letter by saying the bureau “does not and cannot designate domestic terrorist organizations. The FBI can never open an investigation based solely on protected First Amendment activity.”

“We cannot and do not investigate ideology. We focus on individuals who commit or intend to commit violence and criminal activity that constitutes a federal crime or poses a threat to national security. The FBI’s mission is to protect the American people and uphold the Constitution. One does not come at the expense of the other,” the FBI statement said.

On its website, American Contingency says it is an organization that is meant to provide assistance during natural disasters and similar situations. It also says Glover is a former U.S. Army Green Beret.

“Mike Glover is a veteran doing good work out there, but some woke analyst at the FBI says, ‘We’re going to investigate this guy,'” Jordan told Fox News on Wednesday, adding that if “you display the flag, you own a gun, and you voted for Trump, you’re somehow in that category that Joe Biden says are extremist or fascist.”

The GOP congressman also quoted the whistleblower in his letter to Wray in which the unnamed individual accuses an FBI employee of embracing leftist politics.

“It doesn’t take a First Amendment scholar to realize what is protected speech and what isn’t …  it seems clear that this is an instance where an FBI employee reported something because it didn’t align with their own woke ideology,” the whistleblower was quoted by Jordan as saying. “I think this is a primary example of how woke and corrupt the FBI has become.”

Other whistleblowers have allegedly come forward to Jordan and other Republican senators, accusing the FBI’s leadership of bias against former President Donald Trump and his supporters. Meanwhile, other whistleblowers have sounded the alarm about a memo related to alleged violence and intimidation at school board meetings while others have expressed alarm over the agency’s handling of the Jan. 6, 2021, investigation.