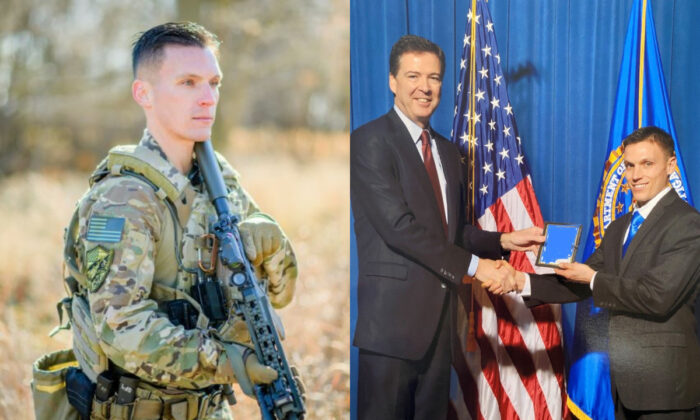 An FBI whistleblower has come forward to say the bureau is violating policies in its investigation into the Jan. 6, 2021, Capitol breach.

The whistleblower raising concerns about how the bureau is handling the Jan. 6 investigation has identified himself as special agent Steve Friend.

Friend, based out of Florida since June 2021, said in a declaration made public on Sept. 26 that he was told that child sexual abuse material investigations were “no longer an FBI priority” and should be referred to local officials. He says he was also told that he would be focusing on domestic terrorism investigations.

Friend says he observed that FBI policies on case assignments were being violated because the Washington Field Office was enabling field offices around the country to lead investigations on crimes that allegedly took place in Washington on or around Jan. 6, but officials in Washington are actually directing the probes.

The situation resulted in active criminal investigations in which Friend is listed as the case agent, but has done no investigative work, according to the declaration.

Friend brought concerns to supervisors, including telling special agent Greg Federico that it was inappropriate to use FBI SWAT teams to arrest suspects who were only facing misdemeanor charges. Federico allegedly said the search warrants being served by the teams were lawful and advised Friend to speak to the FBI employee assistance program to deal with stress.

Federico forwarded the issue to supervisors, with whom Friend reiterated concerns about policy violations. He brought up the kidnapping case involving Michigan Gov. Gretchen Whitmer, which ended with several defendants being acquitted because of the heavy involvement of FBI agents and confidential sources. One of the supervisors falsely said that police officers were killed on Jan. 6, and said that Friend was being “a bad teammate,” according to the declaration.

Friend refused to participate in future operations relating to the Jan. 6 investigation. His security clearance was suspended pending an investigation, and he was stripped of his credentials, firearm, and badge.

Friend is still employed by the FBI but remains suspended without pay, Daniel Meyer, one of his lawyers, told The Epoch Times via email.

“Ultimately, rather than reassigning Special Agent Friend other tasks as he requested, FBI leadership apparently made the choice to retaliate against and make an example of him,” the senators said in a Sept. 26 missive to Wray, a Trump appointee, and Wray’s superior, Attorney General Merrick Garland, a Biden appointee.

“The alleged actions by FBI senior leadership are unacceptable and send exactly the wrong message,” the senators said.

They urged officials to immediately stop disciplining Friend for what was described as protected whistleblower activity, which is protected by federal law.

“These unwarranted actions only serve to chill other employees from reporting wrongdoing, and demonstrate a complete and utter failure by agency leaders to obey the letter and intent of federal whistleblower protection laws,” the lawmakers said.

They asked for answers on what happened to Friend by Oct. 10.

The FBI told The Epoch Times via email it received the letter.

“While we cannot comment on the specifics of personnel matters, all FBI employees understand they are held to the highest standards because their work is critical to fulfilling our mission of protecting the American people and upholding the Constitution of the United States. Employees who don’t carry out their responsibilities are held accountable through an objective administrative process,” a spokesperson said.

“FBI employees who report evidence of wrongdoing through a protected disclosure are protected from retaliation. Such reporting supports the FBI’s mission and is fully consistent with our core values.”

Meyer, a managing partner at Tully Rinckey, said that the case is about “good governance,” adding: “investigative misconduct undermines prosecution and invades the Constitutional rights of innocent Federal employees, including Special Agents like Stephen. Too many Beltway investigations have been rushed in the past decade; the practice is undermining our institutions of government.”

Jason Foster, founder and president of Empower Oversight, said that Friend “is a patriot who did the right thing and is being punished for it.”

“It is outrageous to abuse the legitimate process of a security clearance investigation as an illegitimate pretext to retaliate against someone for protected whistleblowing. Blowing the whistle is not a valid reason to label someone a security risk,” added Foster, who is helping represent Friend.