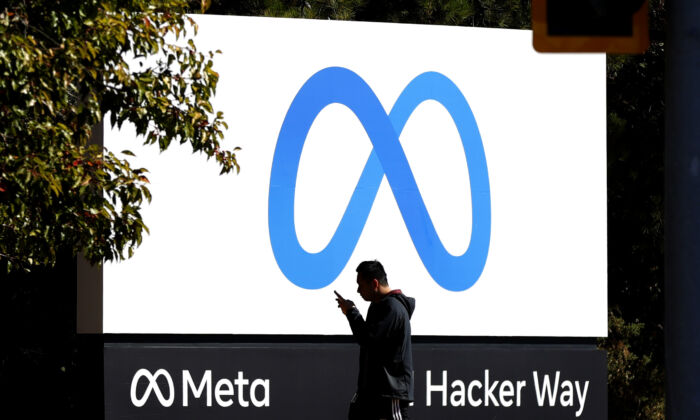 A pedestrian walks in front of a Meta sign at Facebook headquarters in Menlo Park, Calif. on Oct. 28, 2021. (Justin Sullivan/Getty Images)
By Bill Pan

Amid mounting questions over an FBI warning that prompted Facebook to suppress a story about Hunter Biden’s laptop, the federal agency now faces a lawsuit seeking to compel it to publicize conversations it had with the social media giant.

The lawsuit was filed Tuesday by America First Legal (AFL) at a Washington D.C. District Court. The non-profit group, founded by longtime Donald Trump adviser Stephen Miller, said Americans deserve to know what the FBI and the social media giant were up to as the November elections approached.

According to the complaint (pdf), the AFL requested in August that the FBI make public all of its communications with Facebook between Oct. 1, 2020, and Nov. 15, 2020. However, the FBI turned down that request, claiming that it was so “overly broad” that it couldn’t be done “with a reasonable amount of effort.”

AFL’s complaint said: “Barely a month before the 2022 midterm election, FBI officials continue to suppress information of great interest to American voters and stonewall AFL’s request for records relating to the FBI’s collusive scheme with Facebook to censor news and information about the contents of Hunter Biden’s laptop.”

Facebook has drawn much scrutiny after Mark Zuckerberg, CEO of Meta, told popular podcast host Joe Rogan that the platform did algorithmically suppress a New York Post story on emails allegedly recovered from a laptop owned by then-presidential candidate Joe Biden’s son. Those emails, according to the Post, showed a direct link Biden had with his son’s dubious business dealings in China and Ukraine.

Zuckerberg said this apparent censorship only happened after the FBI approached Meta with warnings about “Russian disinformation.”

“The background here is that the FBI came to us—some folks on our team—and was like, ‘Hey, just so you know, you should be on high alert. We thought there was a lot of Russian propaganda in the 2016 election, we have it on notice that basically there’s about to be some kind of dump that’s similar to that,'” he told Rogan in the Aug. 25 interview.

The FBI didn’t specifically mention the laptop story, Zuckerberg said, but Facebook thought it “fit that pattern” the FBI described and decided to limit its reach.

Despite Zuckerberg’s claims, the AFL insists that there was a “comprehensive collusion” between the FBI and Big Tech to censor and control critical information in an effort to put Joe Biden into the White House.

“The evidence is that during the 2020 Presidential election campaign, the FBI conspired and combined with large corporations, including Facebook, to censor and suppress the damning evidence of Biden family corruption and influence peddling found on Hunter Biden’s laptop,” said AFL Senior Counselor Reed Rubinstein. “This was done to help Joe Biden and the Democrats win the 2020 election.”

Republican Sens. Chuck Grassley (Iowa) and Ron Johnson (Wis.) agreed. In their letters to Zuckerberg and FBI Director Chris Wray, the senators asked for names of the government and Facebook employees involved in those conversations about “Russian disinformation.”

“The American people deserve to know whether the FBI used Facebook as part of their alleged plan to discredit information about Hunter Biden,” the senators wrote.