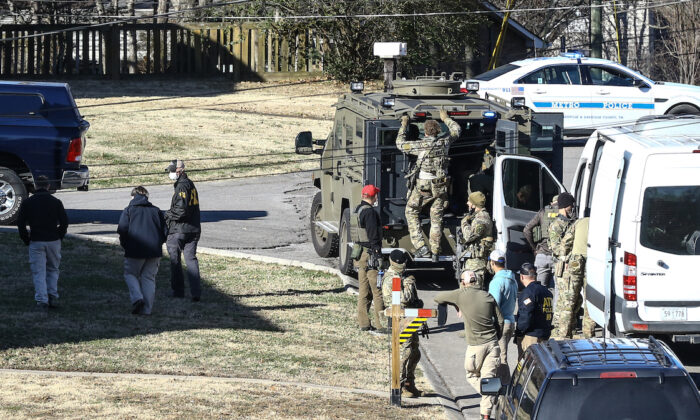 Law enforcement officers investigate the house previously belonging to Anthony Quinn Warner, a 63-year-old man who has been reported to be of interest in the Nashville RV bombing, in Nashville, Tenn., on Dec. 26, 2020. (Terry Wyatt/Getty Images)
Crime and Incidents

The FBI and ATF police on Saturday raided a house located in a Nashville suburb linked to the Nashville downtown RV bombing that happened on Christmas morning.

The home of interest is located on Bakertown Road in Antioch—a neighborhood approximately 12 miles southeast of Nashville, Tenn.

FBI Public Affairs Officer Darrell DeBusk told reporters on the scene that information developed during the course of the investigation had led the authorities to the home.

DeBusk said no one is in custody for now.

Public records show the house was previously owned by Anthony Q. Warner, an unmarried male. He recently sold the house on Nov. 25.

A Google Maps image taken back in May 2019 shows a Chateau motorhome parked on the lot of the house of interest, which is similar to the one in the photo released by the Metro Nashville Police Department that reportedly exploded in Nashville downtown. The Epoch Times cannot confirm if the RV in the lot is the same as the one that exploded.

It’s unclear where Warner was living before the explosion.

Several media outlets, including CBS News and The Tennessean, have identified Warner as a person of interest, citing sources from the law enforcement department. The Metro Nashville Police Department didn’t immediately respond to The Epoch Times’ request to confirm the reports.

The FBI refused to comment on reports of Warner being identified as the alleged person of interest.

Special agent in charge of the FBI Memphis Field Office, Douglas Korneski, told reporters, “At this point, we don’t have any indication that we are looking for another subject.

“We do believe there are currently no active threats,” he added.

The motive behind this incident is unclear.

“I don’t want to speculate but he would think that this person didn’t want to harm people, maybe just wanted to destroy. But we’re not sure until we get further into the investigation,” Metro Nashville Police Department Chief of Police John Drake said on Friday.

Police emergency systems in Tennessee, Kentucky, and Alabama, as well as Nashville’s COVID-19 community hotline and a handful of hospital systems, have been impacted and remained out of service due to the AT&T central office being affected by the blast. The building contained a telephone exchange, with network equipment in it. The company has declined to say exactly how many people have been impacted.

Flights out of Nashville International Airport (BNA) were temporarily halted on Friday by the FAA because of telecommunications issues. They resumed with delays Friday late afternoon.

AT&T said the company is working along with safety and structural engineers to restore power to the equipment at the damaged site, which has become their focus after the explosion.

“We continue to make progress in our restoration following this devastating explosion. We are completing our work as quickly and as safely as possible. We are beginning to restore power to the facilities in the building after connecting generators through the walls. We are hopeful this equipment may be back online in the hours ahead,” the company said in a statement on Saturday afternoon.

The company refused to say whether Warner was an AT&T employee or contractor.