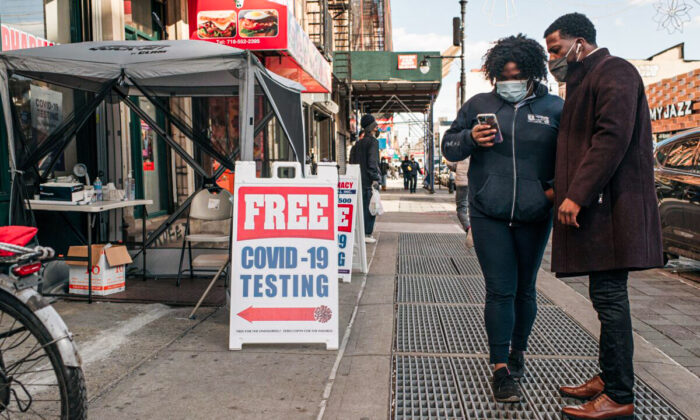 Federal agents searched the Illinois headquarters of the Center for COVID Control amid a federal investigation into the multimillion-dollar testing business, an official confirmed.

Yvonne Gamble, a spokesperson for the Health and Human Services (HHS) inspector general, told The Epoch Times in an email that HHS agents and FBI agents had searched the Rolling Meadows, Illinois, facility.

Annie Thompson, a spokesperson for the Illinois attorney general, told USA Today that the office is “working with the FBI and other law enforcement partners and will not comment on ongoing investigations as we work to hold accountable individuals who engage in unlawful conduct.”

The federal Centers for Medicare & Medicaid Services stated on Jan. 21 that it’s investigating “numerous complaints” associated with laboratories and testing sites run by the Center for COVID Control.

“We take seriously any allegations of fraud or misbehavior by COVID-19 testing sites. CMS’s Center for Clinical Standards and Quality investigates these kinds of complaints and is aware of several alleged instances of misconduct by this company’s labs,” Dr. Lee Fleisher, chief medical officer and director of the Center for Clinical Standards and Quality for CMS, told CNN in a statement.

The agency “identified non-compliance” on behalf of the Center for COVID Control “and is waiting on an allegation of compliance from the laboratory to address the deficiencies cited,” Fleisher said, without elaborating.

Earlier in January, the Center for COVID Control’s founder and CEO, Aleya Siyaj, announced that the company would suspend operations between Jan. 14 and Jan. 22 due to “unusually high patient demand” that has caused staffing shortfalls.

“Center for COVID Control is committed to serving our patients in the safest, most accurate and most compliant manner,” Siyaj said. “Regrettably, due to our rapid growth and the unprecedented recent demand for testing, we haven’t been able to meet all our commitments.”

Later, the company stated that “it is extending its pause on operations” and “remains committed to providing the highest level of customer service and diagnostic quality and will not resume collection of patient samples until staffing resources permit CCC to operate at full capacity.”

Minnesota Attorney General Keith Ellison also filed a lawsuit against the firm earlier in January, claiming it had failed to deliver COVID-19 test results, had delivered them in an untimely manner, or had provided falsified results.

People reported receiving COVID-19 results that were “riddled with inaccurate and false information including listing the wrong test type and false dates and times for when samples were collected from consumers,” his lawsuit read. Others got negative results when they hadn’t submitted samples to be tested, according to the suit.

Meanwhile, the Oregon Department of Justice told local media it would investigate the company for possible violations of state law.

The Center for COVID Control didn’t respond to a request from The Epoch Times for comment by press time.