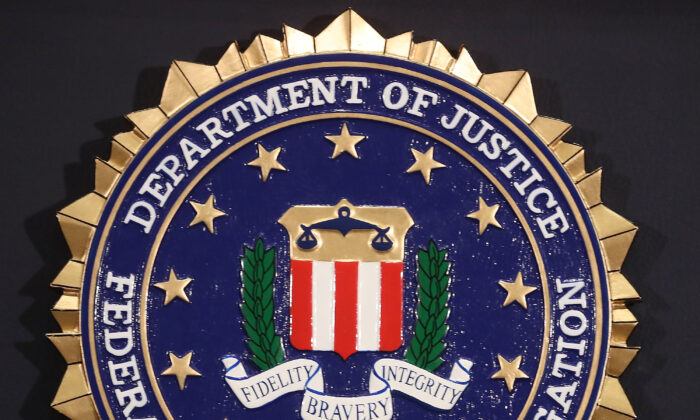 The FBI seal is attached to a podium at a news conference at FBI Headquarters in Washington on June 14, 2018. (Mark Wilson/Getty Images)
US

The FBI is in the process of releasing more records about its right-wing infiltration program, Patriot Conspiracy (PATCON), The Epoch Times has learned.

The person, who provided the information under the condition of anonymity, initially requested PATCON records from the FBI in December 2018. In response, the FBI provided the person with thousands of records that had already been processed via Freedom of Information Act (FOIA) requests from extremism researcher J.M. Berger and Utah attorney Jesse Trentadue.

The person made another request for PATCON records in 2019, but the FBI said it couldn’t locate any others. But then in December 2021, the FBI apparently found more.

“The Federal Bureau of Investigation (FBI) has located approximately 2,665 pages of records potentially responsive to the subject of your request,” states a Dec. 14, 2021, letter seen by The Epoch Times.

It could take many months before the entire trove of documents is released, as the person is expecting to receive an initial set of pages in May. The FBI is in the process of reviewing the records and redacting sensitive information.

PATCON has been subject to allegations of government suppression and media censorship over the years.

As part of his long-running FOIA lawsuit for Oklahoma City bombing records, Trentadue sought to have former FBI and PATCON informant John Matthews testify at his trial in 2014. The Department of Justice (DOJ) opposed Trentadue’s motion, but a federal judge sided with him—paving the way for Matthews to take the stand.

However, on the night before the former informant was set to testify, he changed his mind.

Trentadue accused the FBI of witness tampering and intimidating Matthews against testifying. The FBI vigorously denied that charge, but U.S. District Judge Clark Waddoups said he found the witness tampering allegations to be at least plausible.

On April 30, 2015, Waddoups appointed a separate magistrate judge—a “special master”—to investigate the witness tampering allegations. That investigation has been ongoing behind closed doors for the last seven years, and Trentadue’s case records have been sealed for that duration.

PATCON has also been subject to media censorship, according to court records. Trentadue says in sworn court declarations that the reason the Matthews was willing to testify in his trial is because he had unsuccessfully tried to tell his story to Newsweek.

“Mr. Matthews was upset with the Newsweek story,” Trentadue said in a sworn declaration for his FOIA case. “He expressed to me that he felt betrayed because all Newsweek had done was … expose him to possible retribution from the various groups that he had infiltrated as part of … PATCON without exposing PATCON.”

According to Trentadue, PATCON has been subject to censorship and government suppression because it was, in fact, a program to incite right-wing groups to violence.

“[Matthews] told me that he had been told by the FBI that the purpose of PATCON was to infiltrate and to monitor the activities of [the] extreme political right, consisting of organizations such as the Ku Klux Klan and various Neo-Nazi groups, but that he no longer believed what he had been told by the FBI about the purpose of PATCON,” Trentadue said in a sworn declaration to the court.

“Mr. Matthews told me that, based upon his experience, he now believed that the FBI’s real objective in PATCON had been to infiltrate and to incite these fringe groups to violence.”