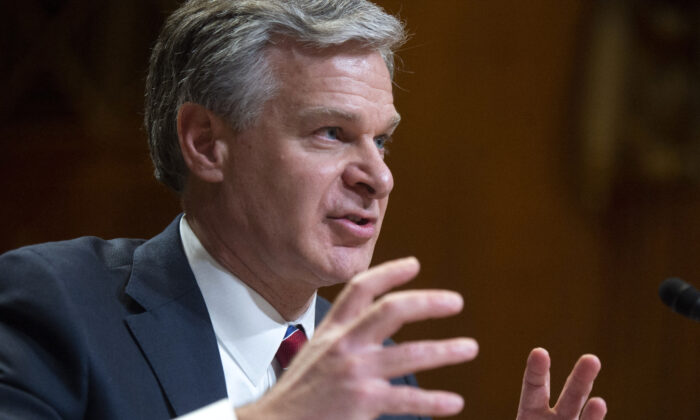 FBI Director Christopher Wray speaks to members of Congress in Washington on May 25, 2022. (Bonnie Cash/Pool/AFP via Getty Images)
Judiciary

The FBI says it is investigating the over two dozen attacks against pregnancy clinics and groups linked to the pro-life movement.

“The FBI is investigating a series of attacks and threats targeting pregnancy resource centers and faith-based organizations across the country,” a bureau spokesperson told The Epoch Times in an email.

“The FBI takes all threats seriously and we continue to work closely with our law enforcement partners and will remain vigilant to protect our communities,” it added.

After a leaked draft Supreme Court opinion was published online on May 2—the court later condemned the leak while confirming the document was legitimate—pro-abortion radicals have vandalized and set fire to an assortment of facilities, including the HOPE Pregnancy Center in Philadelphia, Pennsylvania, and His Nesting Place Home for Mothers & Children in Long Beach, California.

A militant collection of groups referring to itself as Jane’s Revenge has taken credit for many of the incidents and said in a recent threat that it was “open season” on any pro-life facilities that do not shut down.

The Department of Justice (DOJ) and Department of Homeland Security had not commented on the attacks, despite growing calls from lawmakers to address them.

The FBI is part of the DOJ.

“We would like to remind members of the public that if they observe anything suspicious or have information about potential threats to report it to law enforcement immediately, call their local FBI field office, or submit a tip to tips.fbi.gov,” the FBI spokesperson said.

The DOJ has also not heeded calls to prosecute people who have been protesting at the homes of six Supreme Court justices, all appointed by Republican presidents, who may sign onto the finalized opinion that strikes down Roe v. Wade.

Federal law bars protesting outside the homes of any judge with the intent of influencing or intimidating that judge, but Attorney General Merrick Garland, a Biden appointee, has said he cannot comment on whether there are any investigations into the protesters and the DOJ has not charged any with wrongdoing.

State law in Virginia also bars such protests, but Attorney General Jason Miyares, a Republican, has said that local officials must enforce that law, and local officials have thus far declined to do so.

Three justices live in Virginia; the other three who are being harassed live in Maryland, where authorities have made no arrests besides taking into custody a man with a gun near the home of Justice Brett Kavanaugh.

Virginia Gov. Glenn Youngkin and Maryland Gov. Larry Hogan, both Republicans, are among those who have urged federal authorities to act, but to no avail.

Youngkin this week proposed an amendment to the law that would enable state authorities to make the prosecutions, and make the crime a felony instead of a misdemeanor.