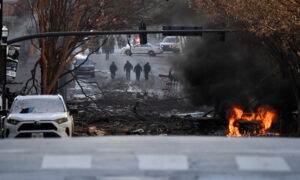 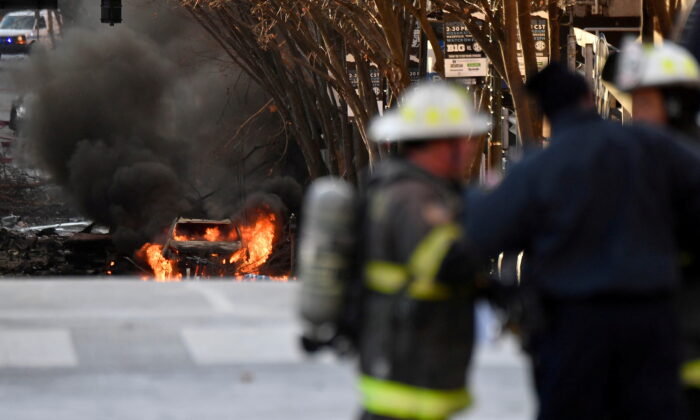 A vehicle burns near the site of an explosion in the area of Second and Commerce in Nashville Nashville, Tenn., on Dec. 25, 2020. (Andrew Nelles/Tennessean.com/USA Today Network via Reuters)
Crime and Incidents

FBI Looking at ‘a Number of Individuals’ in Nashville Explosion

The FBI and law enforcement partners are looking at “a number of individuals” in their investigation of the explosion that went off in downtown Nashville on Christmas.

“We can’t confirm any individuals or anybody we’ve identified,” Douglas Korneski, the special agent in charge of the FBI’s Memphis Field Office, told reporters on Saturday when asked about reports that officials have identified a person of interest in the bombing.

“There are a number of individuals that we’re looking at,” he added. “So, at this point, we’re not prepared to identify any single individual.”

Asked whether officials are actively looking for a person, he said: “We don’t have any indication that we are looking for another subject, but, again, there’s 500 leads we’re running through, so there’s all kinds of individuals we’re looking for.”

Possible human remains were found at the blast site on Friday. Officials are still working on identifying those potential remains. Multiple officials said at the press conference that they believe there is no active threat to Nashville, and that no other detonation devices were discovered in a sweep after the explosion.

“Nashville is safe. We feel and know that we have no known threats at this time against our city,” Nashville Police Chief John Drake told reporters.

Law enforcement has received over 500 leads and are following up on those as they work to identify those responsible and figure out their motivation for detonating an explosive. The FBI’s Behavioral Analysis Unit in Quantico is involved in the work.

“We’re looking at every possible motive that could be involved,” including possibly a targeting of the AT&T building in Nashville, Korneski said.

“I am fairly confident we will be able to identify an individual and ascertain what occurred. It’s going to take some time, but this team behind me, and our folks in the field, we’re very good at what we do.”

Don Cochran, U.S. attorney for the Middle District of Tennessee, compared the blast scene to a giant jigsaw puzzle.

Agents have to gather evidence, catalog it, and figure out what the puzzle looked like, said Cochran, who described what happened as “a cowardly bombing” and referred to the bomber as “the ultimate Scrooge.”

Officials are still asking anyone with information to contact the FBI or the Nashville Police Department. They previously released an image of a recreational vehicle that was seen traveling downtown several hours before the explosion. That same RV was spotted later, broadcasting a message warning that an explosion was imminent just before the blast took place.

The explosion took place at approximately 6:30 a.m. on Friday, about an hour after police officers responded to a report of shots fired.

Six officers went door to door urging residents to evacuate after hearing a message of an impending explosion broadcast by a recreational vehicle, officials said.

Nashville resident Buck McCoy, whose apartment was damaged by the blast, said he heard gunfire and went to look out the window. When he didn’t see anything, he went back to bed, remaining there even after another volley of shots was heard.

“Within like 10 minutes, there was just the most unbelievable explosion that just blew the entire apartment completely to pieces,” McCoy said on Fox News’ “Cavuto Live.”

“If I would have been standing, if I would have got up and went out there and said ‘what’s that noise,’ I don’t think I’d be here today, because the blast blew the windows completely into the next room,” he added.

Nashville police officers are joined in the investigation by fire officials, state law enforcement, the FBI, and agents with the Bureau of Alcohol, Tobacco, Firearms and Explosives (ATF).

FBI Special Agent in Charge Matt Foster said at a press conference Friday that the bureau was “putting everything we have into finding out who was responsible for what’s happened here today.”

Agents were doing technical work and pursuing leads, he added.

Members of the public were asked to submit tips to the website of the FBI’s Nashville office, or over the phone to the bureau.

“There will be others as we see the full extent of this, but already you can tell that it’s going to need special help, special resources,” Cooper told reporters. “And I’m grateful to the state partnering with us to commit to rebuilding.”