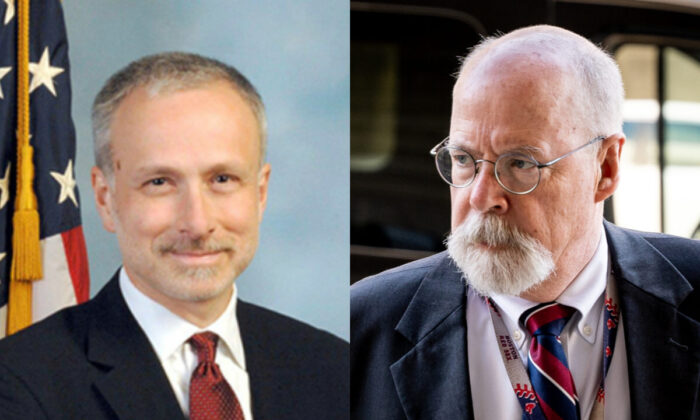 WASHINGTON—Former FBI Director James Comey and his top deputy were briefed on claims against then-presidential candidate Donald Trump brought to the FBI by a lawyer working for Hillary Clinton’s campaign, the bureau’s former general counsel testified in court on May 19.

James Baker, who was the bureau’s top lawyer at the time, met with Michael Sussmann, the Clinton campaign lawyer, on Sept. 19, 2016.

During the meeting, which took place in Baker’s office, Sussmann handed over white papers and thumb drives that allegedly contained data proving a secret back channel between Trump’s business and a Russian bank—claims that were later deemed false by the FBI and CIA.

Baker, testifying during Sussmann’s trial on a charge of lying to the FBI, said Sussmann repeated what he had told his friend the night prior—that he was bringing the information on his own accord, not on behalf of any clients.

“It was part of his introduction to the meeting, ‘I’m not here on behalf of any particular client.’ I’m 100 percent confident that he said that,” Baker said.

Sussmann told Baker that media outlets were preparing to publish stories on the claims. Within minutes of getting the data, Baker picked up the phone and called Bill Priestap, a top FBI official.

“It involved Russia, and this bank had links to the Kremlin. That seemed to me, on its face, to be a potential national security threat,” Baker said, noting that the bureau was already investigating alleged connections between the Trump Organization and Russia. “It was a very high priority for me.”

During a meeting with Priestap, Baker vouched for Sussmann, who he has described as a friend. The pair met while working in the same Department of Justice division.

Baker repeated Sussmann’s claim—which led to a criminal charge against Sussmann and the trial—that he wasn’t bringing the information on behalf of a client, but noted that Sussmann had represented the Democratic National Committee and the Clinton campaign.

Baker said he gave the data the next day to Peter Strzok, another top FBI official.

“I wanted to get rid of this material as quickly as possible. I hated having it on my desk. I didn’t want to have this material any longer than I needed to,” Baker said.

“It seemed to me of great urgency and seriousness that I would want to make my bosses aware of this information,” Baker said.

He recounted both men being “quite concerned” about the allegations.

FBI experts who analyzed the data found that it didn’t support the claims, FBI agent Scott Hellman testified earlier this week. The CIA in early 2017 determined that the allegations weren’t only “untrue and unsupported,” but that the data was “user created” and “contained gaps.”

It became clear “that there was nothing there,” Baker said.

Priestap came back to Baker, who was thinking of publishing an article, to inquire about the report and Baker reached out to Sussmann to get the identity, which turned out to be Eric Lichtblau of The New York Times.

Baker met twice with Lichtblau. During the first meeting, the reporter agreed to delay the story. In the other, FBI officials conveyed that the bureau had concluded the materials didn’t substantiate that there was a surreptitious connection between Trump’s business and the Russian bank.

“We concluded there was no substance,” Baker said.

The New York Times, in an article published on Oct. 31, 2016, said the FBI “ultimately concluded that there could be an innocuous explanation” for the purported link. It hasn’t been updated to include information that has entered into the public sphere since its publishing, such as the CIA’s conclusion.

Defense lawyers after a lunch break tried to portray Baker as an unreliable witness, as they have in hearings and filings entered before the trial began.

Sean Berkowitz, one of the lawyers, pointed out that  Baker told the Department of Justice (DOJ) Office of the Inspector General in mid-2019 that Sussmann told Baker in the meeting that he had information “that he said related to strange interactions that some number of people that were his clients, who were, he described as I recall it, sort of cyber-security experts, had found.”

Baker also told prosecutors with special counsel John Durham’s team in 2020 that the topic of Sussmann’s clients didn’t come up during the meeting.

On the stand, Baker said his statement to the inspector general’s office was mistaken and that the truth is that Sussmann told him in person that he wasn’t bringing the information on behalf of a client. He said he didn’t consult his texts or otherwise prepare before speaking to the DOJ watchdog or prosecutors.

“Did it ever occur to you … to look at your phone for any text messages?” Berkowitz wondered.

“For better or worse, it did not occur to me,” Baker said.

Prior to the trial, Durham’s team revealed that it had obtained a text that Sussmann sent Baker asking him to meet, in which Sussmann stated that he had “time-sensitive (and sensitive)” information and that he was “coming on my own—not on behalf of a client or company—want to help the Bureau.”

Baker also challenged notes taken of a DOJ meeting involving him and high-ranking officials in 2017, during which the Alfa Bank allegations were raised. According to the notes, said to have been taken by a DOJ lawyer, McCabe said that the allegations were sourced from an “attorney” who “brought [them] to [the] FBI on behalf of his client.”

Baker said he did not recall that moment during the meeting.