FBI Lawyer: Knowing Clinton Was Behind Trump Allegations Would Have Changed Things 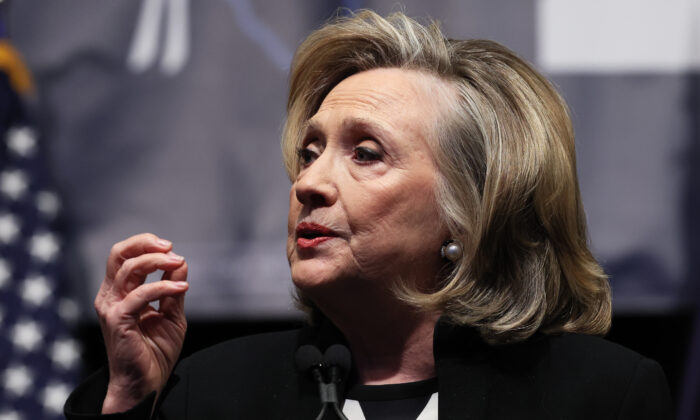 John Haughey
Reporter
John Haughey reports on public land use, natural resources, and energy policy for The Epoch Times. He has been a working journalist since 1978 with an extensive background in local government and state legislatures. He is a graduate of the University of Wyoming and a Navy veteran. He has reported for daily newspapers in California, Washington, Wyoming, New York, and Florida. You can reach John via email at john.haughey@epochtimes.us
View profile
and Zachary Stieber

WASHINGTON—The FBI lawyer who served as a conduit for flimsy allegations against Donald Trump said May 19 he would have acted differently if he knew Trump’s rival for the presidency, Hillary Clinton, was behind the claims.

James Baker, who now works for Twitter, said that he likely would not have have met with Michael Sussmann, who is accused of passing on data that allegedly linked Trump’s business to a Russian bank, if he knew Sussmann was acting on behalf of the Clinton campaign.

“I don’t think I would have,” Baker said on the stand in federal court in Washington.

Knowing Trump’s opponent was behind the allegations “would have raised very serious questions, certainly, about the credibility of the source” and the “veracity of the information,” Baker said. It would also have heightened “a substantial concern in my mind about whether we were going to be played.”

The testimony bolsters a key piece of special counsel John Durham’s case against Sussmann—that knowing the sources propelling Sussmann to meet with Baker would have altered how the FBI analyzed the information, which the bureau ultimately found did not substantiate the claims of a secret backchannel between the Trump Organization and Alfa Bank.

“Absent Sussmann’s false statement, the FBI might have taken additional or more incremental steps before opening and/or closing an investigation,” prosecutors said in Sussmann’s indictment, which charged him with lying to the FBI.

Defense lawyers have argued that the impact of Sussmann’s alleged lie was “trivial or negligible.”

Sussmann met Baker in the FBI lawyer’s office on Sept. 19, 2016, just weeks before the presidential election. No other persons were present.

Baker said Thursday that would not have been the case if he knew the Clinton campaign’s involvement. He said he likely would have directed Sussmann to other FBI personnel—bureau lawyers don’t typically receive information—or would have still met with Sussmann, but made sure other personnel were present.

“I was willing to meet with Michael alone because I had high confidence in him and trust,” said Baker, who has described Sussmann as a friend. “I think I would have made a different assessment if he said he had been appearing on behalf of a client.”

Sussmann told Baker in a text message the night before the meeting that he had sensitive information he wanted to pass on but that he was doing so on his own accord, not on behalf of any clients. Baker testified that Sussmann repeated the lie during the meeting. Sussmann later told a congressional panel that the information was given to him by a client.

“I think it’s most accurate to say it was done on behalf of my client,” Sussmann said, apparently referring to Rodney Joffe, a technology executive who has said he was promised a position in the government if Clinton won the election.

While Sussmann, Joffe, and others worked on the white papers that he ultimately passed to Baker, the lawyer was billing the Clinton campaign, according to billing records. Sussmann also told the campaign about the allegations before he met with Baker, though the campaign allegedly did not approve the meeting.

Sussmann was well-known to the FBI, having worked with the bureau on multiple cases, including the alleged hack of Democratic National Committee servers. Sussmann “had a vibrant national security practice that had contact with the FBI a lot,” Baker said. Sussmann worked for Perkins Coie, which was the Clinton campaign’s law firm during the 2016 election, and has a long history of working with Democrats.

On cross-examination, Sean Berkowitz, representing Sussmann, hammered Baker over inconsistencies in his testimony and what he’s said before.

Baker, for instance, told the Department of Justice Office of Inspector General in 2019 that Sussmann said he had information stemming from “people that were his clients.” Baker said he was using a “shorthand way” of describing the cyberexperts with whom Sussman was working.

In 2018, testifying to a House of Representatives panel behind closed doors, Baker said he couldn’t remember whether he knew at the time that Baker was representing the Clinton campaign. “I don’t know that I had that in my head when he showed up in my office,” Baker said at the time.

“I just find that unbelievable that the guy representing the Clinton campaign, the Democrat National Committee, shows up with information that says we got this, and you don’t ask where he got it, you didn’t know how he got it,” Rep. Jim Jordan (R-Ohio) responded.

“I was uncomfortable with being in the position of having too much factual information conveyed to me, because I’m not an agent. And so I wanted to get the information into the hands of the agents as quickly as possible and let them deal with it. If they wanted to go interview Sussmann and ask him all those kinds of questions, fine with me,” Baker said.

According to Baker’s testimony and previous remarks from Sussmann, no agents ended up asking those kinds of questions.

John Haughey
Reporter
John Haughey reports on public land use, natural resources, and energy policy for The Epoch Times. He has been a working journalist since 1978 with an extensive background in local government and state legislatures. He is a graduate of the University of Wyoming and a Navy veteran. He has reported for daily newspapers in California, Washington, Wyoming, New York, and Florida. You can reach John via email at john.haughey@epochtimes.us