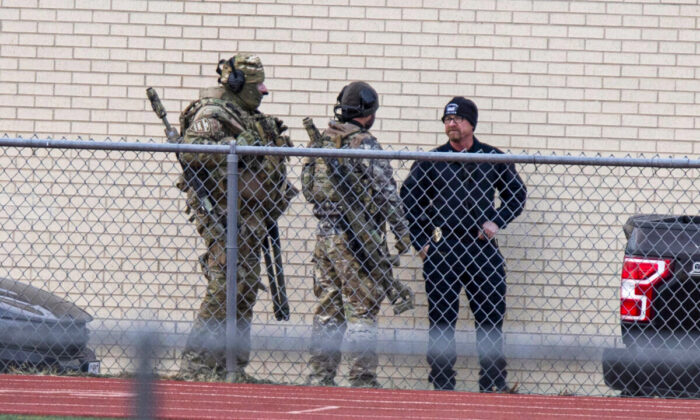 The FBI has identified the hostage-taker who was killed by police after a lengthy standoff at a Texas synagogue on Jan. 15 as a British national named Malik Faisal Akram.

Akram, 44, was shot and killed when an FBI SWAT team stormed the Congregation Beth Israel synagogue in Colleyville, Texas, near Fort Worth, at around 9 p.m. local time, following a 10-hour standoff in which four people were taken hostage.

Colleyville Police Chief Michael Miller confirmed at a press conference late on Jan. 15 that the suspect had been killed.

“Prayers answered. All hostages are out alive and safe,” Abbott said in a Jan. 15 post on Twitter.

While it’s not clear why Akram targeted the synagogue, he was heard ranting on a Facebook livestream of the services and demanding the release of Pakistani neuroscientist Aafia Siddiqui, who was convicted of trying to kill U.S. Army officers in Afghanistan. Convicted in 2010 by a New York federal court, Siddiqui is serving an 86-year sentence at Carswell Air Force Base near Fort Worth, about 15 miles away from Colleyville, the location of the synagogue.

Texas resident Victoria Francis told The Associated Press that she watched about an hour of the livestream before it cut out, adding that she heard the man rant against America and claim he had a bomb.

“He was just all over the map. He was pretty irritated and the more irritated he got, he’d make more threats, like, ‘I’m the guy with the bomb. If you make a mistake, this is all on you.’ And he’d laugh at that,” she said. “He was clearly in extreme distress.”

FBI special agent in charge Matthew DeSarno said on Jan. 16 that there was no indication other individuals besides Akram were involved.

“My thoughts are with the Jewish community and all those affected by the appalling act in Texas. We condemn this act of terrorism and anti-semitism,” she wrote.

“We stand with US in defending the rights and freedoms of our citizens against those who spread hate.”

Karen Pierce, British ambassador to the United States, in a series of tweets thanked U.S. law enforcement “for their brave efforts in securing the safe release of those held” while condemning the incident as a “shocking act on people practicing their faith.”

“The UK & US stand shoulder to shoulder in defiance of terrorism and in defence of the fundamental rights and freedoms of our citizens,” Pierce added.

President Joe Biden said in a statement that the coming days would likely bring more clarity around the motivations of the hostage-taker, and he vowed to stand against anti-Semitism.

White House national security adviser Jake Sullivan told CBS News on Jan. 16 that the hostage situation was an act of “terrorism” and “anti-Semitism.”