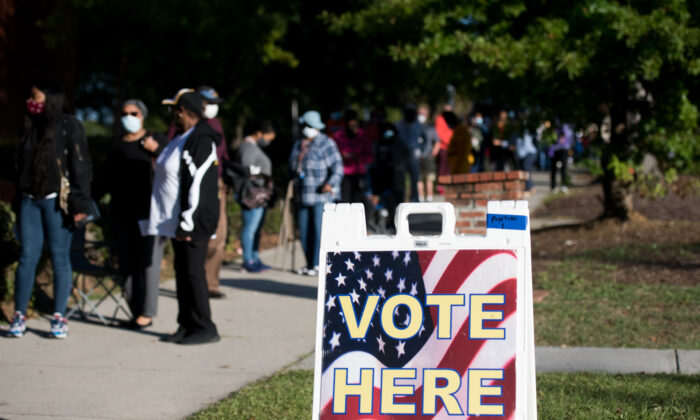 People stand in line outside the Richland County Voter Registration & Elections Office on the second day of in-person absentee and early voting in Columbia, S.C., on Oct. 6, 2020. (Sean Rayford/Getty Images)
US News

Federal officials said that hackers, who are possibly actors for foreign adversaries, have penetrated into U.S. government networks and accessed election systems.

In a joint alert, the FBI and Cybersecurity and Infrastructure Security Agency (CISA) said there was unauthorized access to election support systems—just weeks to go before the Nov. 3 election. CISA is part of the Department of Homeland Security.

“CISA is aware of some instances where this activity resulted in unauthorized access to elections support systems; however, CISA has no evidence to date that integrity of elections data has been compromised,” the alert said.

Several weeks ago, in a similar alert, the two agencies said there’s no information that suggests there was a cyberattack on U.S. election infrastructure after there were “false claims of hacked voter information,” describing the claims as “disinformation.”

In another alert, the FBI and CISA noted that foreign actors and criminals have been spreading a number of false and inconsistent claims during the 2020 election season. These efforts, they said, are an attempt to “manipulate public opinion, discredit the electoral process, and undermine confidence in U.S. democratic institutions.”

The two agencies noted that “these malicious actors could use these forums to also spread disinformation suggesting successful cyber operations have compromised election infrastructure and facilitated the ‘hacking’ and ‘leaking’ of U.S. voter registration data,” according to a joint statement.

Attorney General William Barr told CNN on Sept. 2 that he believes the CCP poses the greatest threat, pushing back on largely Democratic Party claims that the Kremlin is trying to meddle in the election to secure Trump’s reelection.

“I believe it’s China,” Barr said at the time. “China more than Russia right now.” But he stressed that he wouldn’t be surprised if Russia or another foreign state actor tries to meddle in the election just as Russia and other adversaries did during the 2016 election.