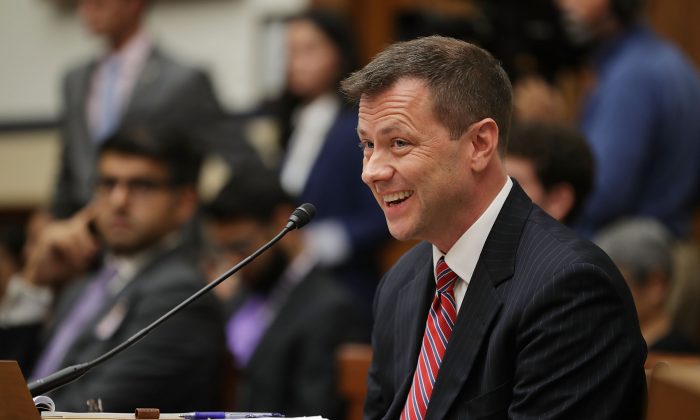 FBI Was Investigating Trump Earlier Than It Let On, Texts Show

In a text message to FBI attorney Lisa Page sent on July 28, 2016, Strzok mentioned “our open [counterintelligence] investigations relating to Trump’s Russian connections.” The date of the text message is significant because the bureau has long maintained that it opened the investigations into Trump campaign associates on July 31 of that year.

Notably, in the electronic communication (pdf) memorializing the opening of the investigations, Strzok wrote that the probes were triggered by information the bureau received on July 29, 2016. The FBI has never disclosed that it was investigating Trump prior to that date. The bureau didn’t immediately respond to a request by The Epoch Times for comment.

House Intelligence Committee ranking member Devin Nunes (R-Calif.) has repeatedly said that the FBI was investigating the Trump campaign months earlier than July 31, 2016. For years, only circumstantial evidence was in the public realm to back that claim.

Page and Strzok played key roles in the investigation, while texting about their open hatred of Trump and preference for Clinton. Strzok told Page that “we’ll stop” Trump from becoming president, discussed an “insurance policy” in the event that Trump won, and wondered about “impeachment” around the time he joined the special counsel team in the early months of Trump’s presidency.

One of the errors concerned Kevin Clinesmith, an FBI attorney who doctored an email to hide the fact that Page had worked with the CIA. Clinesmith pleaded guilty earlier this year to a false-statements charge connected to the forgery. He hasn’t yet been sentenced.

“President [Trump] was NEVER afforded a peaceful transition, not even a peaceful 2016 campaign!” White House press secretary Kayleigh McEnany wrote on Twitter in response to news of the Strzok text message. “The Obama-era FBI was going after him from the beginning!”