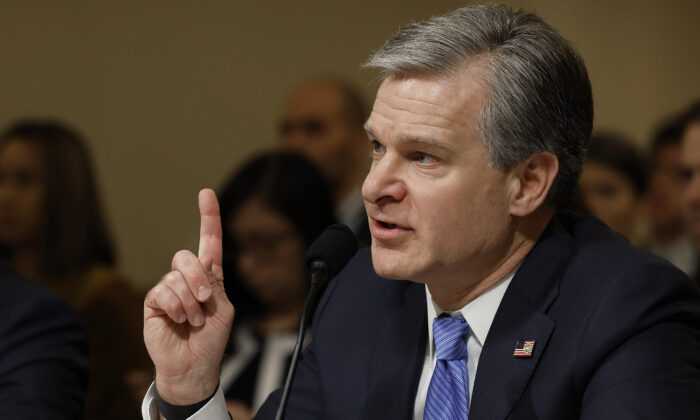 FBI Director Christopher Wray on Nov. 17 defended leaving a congressional hearing abruptly and using an official bureau jet to go on vacation after telling a senator he was attending to business.

Wray, a Trump appointee, confirmed under questioning by Sen. Josh Hawley (R-Mo.) that he flew to Saranac Lake in New York from an Aug. 4 Senate hearing.

“You were going on vacation?” Hawley asked.

Hawley asked, “So, you left a statutorily required oversight hearing in order to go on a personal vacation to the Adirondacks?”

Wray said, “I took a flight to go visit my family, as had been previously arranged in conjunction with leadership of the committee.”

Hawley then cited Sen. Chuck Grassley (R-Iowa), who had asked Wray to remain for longer during the August hearing so members could ask more questions.

At one point, Grassley said, “I assume you’ve got other business,” to which Wray answered affirmatively.

“And you said you had a plane to catch. You had somewhere to go. And now we find out it was for vacation?” Hawley said.

Grassley’s office didn’t respond to a request for comment.

“So you had to leave the hearing early because you’re gonna see him later in Iowa? You had a week,” Hawley said.

Wray said, “No, I had to leave when I said I was going to have to leave as had been previously organized with the leadership.”

A bureau spokesperson previously told The Epoch Times that Wray followed federal guidelines on using government aircraft. Wray said he’s required to use an FBI plane when he travels, regardless of the reason, and that he pays for each trip. Wray said on Nov. 17 that the bureau would comply with requests for receipts.

Hawley noted that a number of FBI whistleblowers have come forward in recent months, alleging that the bureau is violating federal guidelines in its treatment of Jan. 6 defendants and employees.

“Frankly, I think you should have been gone a long time ago, and given your behavior recently, it only makes it more clear,” Hawley said.

During the hearing, Wray said the FBI wouldn’t retaliate against the whistleblowers, although some have offered differing accounts.

Wray declined to talk about matters related to what the whistleblowers have reported.

“We have, as we speak, a number of personnel matters that are underway,” he told Sen. Ron Johnson (R-Wis.). “For reasons I’m sure you can appreciate, we can’t discuss that.”

Johnson said, “That’s always your excuse. I understand how you remain above the law by using that excuse repeatedly.”