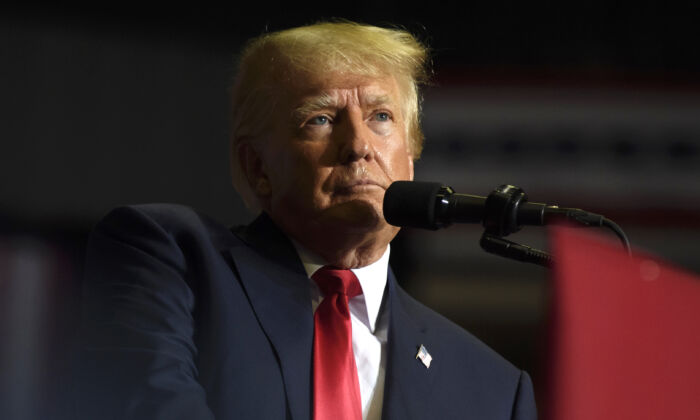 Former President Donald Trump speaks at a "Save America" rally to support Republican candidates running for state and federal offices in the state at the Covelli Centre in Youngstown, Ohio, on Sept. 17, 2022. (Jeff Swensen/Getty Images)
By Zachary Stieber

The FBI on Sept. 26 changed the total number of documents it said it seized from former President Donald Trump’s estate.

Sixty-three additional documents or photographs without classification markings were taken from Trump’s Mar-a-Lago resort than previously listed by the FBI, according to an updated inventory list.

The revised inventory was submitted to the federal court in southern Florida on orders from U.S. District Judge Raymond Dearie, a Reagan appointee who was inserted into the case as a special master, or an independent third party to handle disputes and other matters.

Dearie ordered a government official “with sufficient knowledge of the matter” to submit a declaration or affidavit stating whether the detailed property inventory released on Sept. 2 “represents the full and accurate extent of the property seized from” Trump’s home in August when FBI agents executed a search warrant there.

An FBI supervisory special agent, whose name was redacted, fulfilled the order. The agent, based in Washington, said he or she leads a squad of special agents, intelligence analysts, and other personnel in carrying out counterintelligence and espionage investigations, and that their team executed the warrant.

The earlier inventory was performed by the agent and workers under their direction but, wanting to make sure the inventory was accurate, “I and FBI personnel working under my direction conducted an additional review and recount of the Seized materials in order to make this declaration,” the agent told Dearie.

That resulted in some “minor revisions,” the agent acknowledged.

An Epoch Times review of the earlier and current inventory lists showed the differences included 63 non-classified documents or photographs being added to the total the FBI said it seized. Additionally, the new list contains two fewer magazines/newspapers/press articles and two fewer empty folders with “CLASSIFIED” banners.

The FBI still says it took 33 boxes from Mar-a-Lago.

The update, if accurate, means the government seized over 11,200 non-classified materials from the Florida residence.

The agent who filed the updated list said he or she declared, under the penalty of perjury, that they were “not aware of” any documents or other materials seized from Trump’s home that are not listed in the updated inventory, with the exception of materials taken by the government’s filter team.

That team was focused on identifying and segregating materials they thought could fall under attorney-client privilege.

A spokesman for Trump did not immediately respond to a request for comment.

The updated inventory list does not include documents marked classified, based on a recent appeals court order that blocked Dearie and Trump’s lawyers from reviewing those documents. The earlier inventory listed 103 documents with classification markings.