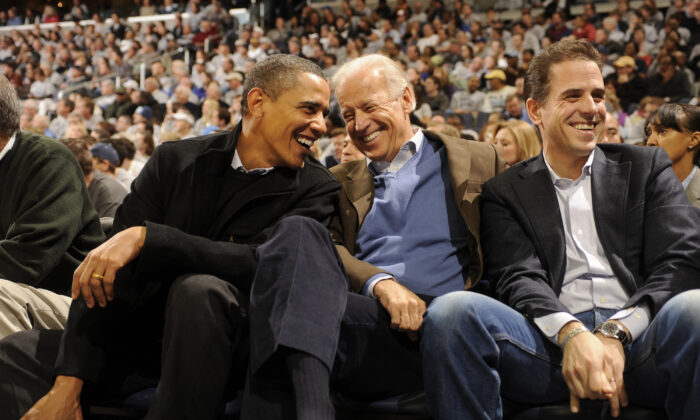 News reports last month claimed that in late 2019, the FBI had opened an investigation of matters related to information found on a laptop purportedly belonging to Hunter Biden. Would the bureau continue its probe under a Biden administration?

Doubtful. In fact, it’s unlikely there was ever any investigation at all.

In July 2019, after Hunter Biden failed to reclaim his laptop from a computer repair shop in Delaware, the shop owner and his father grew concerned about information they found on the device and reached out to the FBI’s Albuquerque field office. They were turned away. In mid-October, the bureau contacted the shop owner and two months later, an assistant U.S. attorney from Delaware issued a grand jury subpoena to retrieve it.

So doesn’t all that mean it’s a real investigation? It’s worth remembering that in June, 15 FBI agents were sent to Alabama to investigate whether a knot tied like a noose in NASCAR driver Bubba Wallace’s garage was evidence of a race crime. It wasn’t. One agent with a smartphone would have quickly discerned the truth—that the knot had been there for more than a year—but because race is a third rail in American politics and culture, the FBI was determined to prove they were on the job.

The investigation was performative, designed to show that the FBI was taking the matter seriously, even though it wasn’t.

The FBI’s investigation into Hillary Clinton’s private email server also was performative. There was never any chance the 2016 Democratic presidential candidate was going to be charged with mishandling classified information—not least because scores of other Obama officials, including the president himself, had communicated with her on what they knew was an unsecure server.

During his three-year tenure, FBI Director Christopher Wray allegedly has made a habit of covering up for Obama administration officials. He kept documents from Rep. Devin Nunes’s (R-Calif.) probe of the FBI’s Crossfire Hurricane investigation. Wray also allegedly withheld records from Michael Flynn’s lawyer, Sidney Powell, that showed how Obama’s bureau had framed her client, including the notes of an FBI agent documenting Joe Biden’s involvement. It’s improbable that Wray would greenlight an investigation of the former vice president’s son.

The Hunter Biden case appears to fall into the performative category. After the New York Post published damning excerpts from correspondence found on the laptop, the bureau needed to show it was in hot pursuit. But it wasn’t. Otherwise, the FBI would have interviewed Bobulinski, whose name is on correspondence found on the laptop, long before last month’s kabuki show.

So, if there was no real investigation, why did the U.S. Attorney’s Office in Delaware, a state dominated by Joe Biden for nearly half a century, issue a grand jury subpoena for the laptop? As grand jury material, it could be kept under wraps.

The FBI and other agencies have known about Hunter Biden’s relationships with allegedly corrupt foreign entities for quite some time. In 2015, State Department officials warned then-Vice President Biden about Hunter taking a seat on the board of a Ukrainian energy company, Burisma, which was under various corruption investigations.

Nonetheless, Hunter continued to draw a monthly salary of more than $50,000 from a company whose owner was on Ukraine’s most-wanted list. In January 2016, Obama officials, including a Biden aide, reportedly met with Ukrainian prosecutors and told them to drop their Burisma investigation and allow the FBI to take it over.

If the FBI had really been investigating the Burisma case, Trump wouldn’t have had to ask the Ukrainian president for help investigating potential Biden family corruption in Ukraine, because the bureau would have found it. But because the FBI wasn’t investigating the risk to U.S. national security that Hunter Biden’s work for an allegedly corrupt foreign enterprise entailed, House Democrats impeached the president to protect the Bidens.

What was the FBI doing instead of its job? When the impeachment process began, the bureau came back around and asked the Delaware computer repair shop owner about the Biden laptop, and when the House was formulating articles of impeachment, it hid the device.

It’s not hard to see why so many want to believe the FBI is really investigating Hunter Biden. It would come as evidence that after the scandals of the last four years in which the FBI played a lead role, U.S. law enforcement authorities are once again enforcing our laws without prejudice or favor.

Instead, the evidence shows that the FBI is one of many institutions that no longer belong to the American public. Rather, its job is to protect and advance the privileges and interests of an increasingly powerful class of elites who draw their wealth and prestige from their relationships with corrupt foreign entities.

That’s why it appears the FBI didn’t investigate Hunter Biden’s laptop, but buried it.