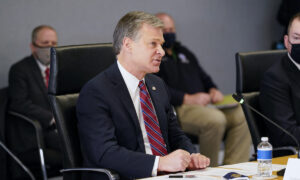 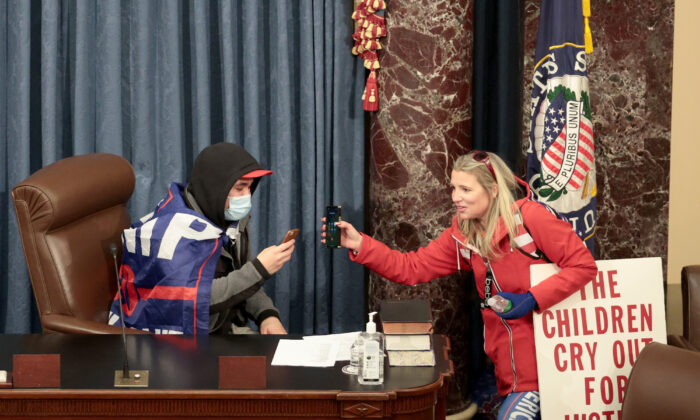 Authorities allege Christine Priola, a former therapist for the Cleveland Schools, is the woman on the right in the chambers of the Senate during an illegal breach of the U.S. Capitol on Jan. 6, 2020. (Win McNamee/Getty Images)
Crime and Incidents

Federal authorities on Thursday arrested and charged a former occupational therapist for Cleveland schools, allegedly seen in a viral photo showing her standing next to the vice president’s chair in the Senate during the Jan. 6 breach of the Capitol.

According to a criminal complaint filed Thursday in the U.S. District Court for the District of Columbia (pdf), 49-year-old Christine Priola faces three federal charges: violent entry and disorderly conduct on Capitol grounds, unlawful parading while at the Capitol, and unlawfully entering and remaining on restricted grounds.

The filing says the Cleveland Division of the FBI received an anonymous tip that Priola was the woman pictured in the photograph, taken by a Getty Images photographer, standing next to the vice president’s chair.

“Those photos and electronic images were circulated on numerous news media platforms, some of which showed an individual holding a sign reading, in part, ‘The Children Cry Out for Justice,’ and pointing a smart cellular telephone device at an individual occupying the seat of the Vice President of the United States,” states the complaint, which identifies the suspect as Priola.

“The female was also wearing a red winter coat and distinctive pants that appeared to have the name ‘Trump’ and other words written on the leg,” it said.

On Saturday, authorities from the FBI, U.S. Marshals Service, and Willoughby Police Department, executed a warrant at Priola’s home, where they retrieved evidence, WKYC reports. The complaint against Priola indicates that authorities were able to use data from her cellphone to confirm her location at the Capitol at the time of the riot.

Priola made a brief appearance in U.S. District Court in Cleveland before her case was transferred to the District of Columbia, according to Cleveland.com.

The Department of Justice said in a statement that Priola has been released on bond with home detention and electronic home monitoring.

Priola resigned following her alleged involvement in the Capitol breach, with WKYC reporting that her resignation letter, submitted to the Cleveland Metropolitan School District (CMSD) on Thursday, cited reasons for her resignation. These include her wish to switch career paths to focus on exposing human trafficking and pedophilia, including “in our government and children’s services agencies,” and that she does not support paying union dues that she claims are used to “fund people and groups that support the killing of unborn children.”

The Epoch Times has been unable to reach Priola for comment.

The CMSD, in a statement cited by WKYC, said, “While CMSD deeply believes in the right of any individual to peacefully protest, as many did on the Capitol plaza on Wednesday afternoon, the District deeply condemns the actions of those involved in the riots inside the Capitol and on the Capitol grounds.”

The Justice Department said federal authorities have charged about 80 cases and arrested 34 individuals in connection with last week’s Capitol breach, which took place as a joint session of Congress was meeting to certify President-elect Joe Biden’s electoral win.