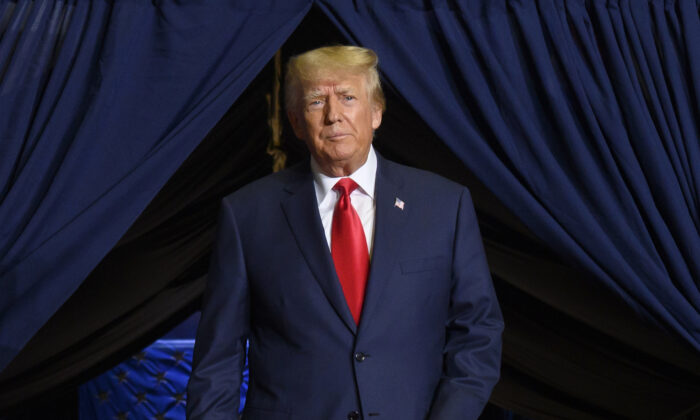 Former President Donald Trump enters the stage at a Save America Rally to support Republican candidates running for state and federal offices in the state of Ohio at the Covelli Centre in Youngstown, Ohio, on Sept. 17, 2022. (Jeff Swensen/Getty Images)
By Zachary Stieber

The FBI team that seized documents from former President Donald Trump’s Florida resort improperly viewed communications between Trump and an attorney, violating attorney-client privilege for a third time, lawyers for Trump said in a new filing.

The filter process set up by the government to try to prevent FBI agents from viewing privileged materials has already failed twice, the government has acknowledged. On Sept. 26, government officials informed Trump lawyers of a third failure, the lawyers said in a new filing lodged in a federal court in southern Florida.

FBI agents viewed an email that they sent to the Privilege Review Team, a team that was supposed to filter out all potentially privileged materials before agents were able to view any.

The review team has characterized the email as non-privileged, but Trump disagrees.

“Plaintiff believes the email falls squarely into the category of attorney-client privileged,” Trump lawyers told U.S. District Judge Raymond Dearie, a Reagan appointee who is serving as a special master in the case.

Benjamin Hawk, the Department of Justice (DOJ) official in charge of the filter team, claimed during a recent hearing that the first two failures to separate potentially privileged materials were examples of the filter process working, but U.S. District Judge Aileen Cannon, the Trump appointee who inserted Dearie into the case, expressed doubt.

The instances “indicate that, on more than one occasion, the Privilege Review Team’s initial screening failed to identify potentially privileged material,” she said.

FBI agents who viewed the potentially privileged materials may still be working on the case, according to a sealed filing described by Cannon.

In the new filing, Trump’s lawyers said they want the names of all government officials who were exposed to the potentially privileged materials.

“The unilaterally imposed filter team, which made no effort to contact Plaintiff’s counsel throughout its review process, has admitted to three breaches so far,” the lawyers said. “All this before review by the Special Master and the Plaintiff. By way of this filing, Plaintiff is asking the Special Master to order disclosure of the names of each attorney and Special Agent who was exposed to materials eventually provided to the Privilege Review Team.”

The filing came as the government sought a delay in the deadline to provide Trump with the approximately 11,242 non-classified materials that agents seized from his estate in Palm Beach on Aug. 8. That tranche doesn’t include materials sifted out by the Privilege Review Team, nor does it include materials with classified markings that Dearie and Trump attorneys both are being blocked from reviewing.

The government has said the delay is needed because of struggles to contract with a vendor to scan the documents and store them electronically so that other parties can access them.

Trump lawyers say the government’s timelines have been unrealistic and urged Dearie to accept deadlines the lawyers are proposing.

The documents include roughly 200,000 pages, the lawyers said.

“That estimated volume, with a need to operate under the accelerated timeframes supported by the Government, is the reason why so many of the Government’s selected vendors have declined the potential engagement,” they said.