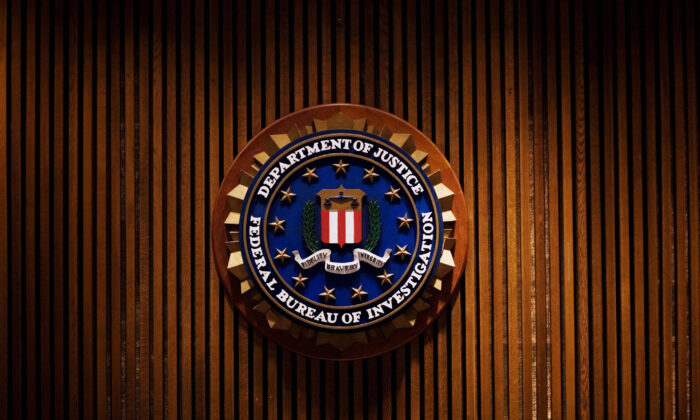 A crest of the Federal Bureau of Investigation inside the J. Edgar Hoover FBI Building in Washington on Aug. 3, 2007. (Mandel Ngan/AFP via Getty Images)
By Naveen Athrappully

Recently unsealed court documents appear to show that the FBI misled a U.S. magistrate judge in its request for a warrant to seize assets from a privately owned safe deposit box store in Beverly Hills, California.

The FBI began investigating U.S. Private Vaults—a store housing more than 1,000 private safe-deposit boxes—after its agents and local law enforcement observed suspected drug dealers and buyers in the vicinity. On March 22, 2021, FBI raided the vault, armed with a warrant by U.S. Magistrate Judge Steve Kim, which granted them the right to seize properties belonging to the firm as part of the investigation, according to a Los Angeles Times report.

The agency seized $86 million worth of cash, gold, silver, expensive jewelry, and other assets.

Pages 84 and 85 of the government’s affidavit requesting multiple warrants contained an assurance that the federal agency would respect the rights of safety deposit box customers.

Written by Andrew Brown, an assistant U.S. attorney and driving force of the investigation, that section of the affidavit makes it clear that warrants only authorize “seizure of the nests of the boxes themselves, not their contents,” according to the Los Angeles Times.

However, by the time Kim got the warrant request, the FBI had allegedly made preparations to seize the contents inside the deposit boxes.

In the summer of 2020, Matthew Moon, a high-ranking FBI agent from Los Angeles, asked Jessie Murray, chief of the FBI’s asset forfeiture unit in Los Angeles, whether Murray’s team was “capable of handling a possible large-scale seizure” of safety deposit boxes of U.S. Private Vault, the Los Angeles Times reported.

Murray said yes. In late 2020 and early 2021, Murray joined a conference call to plan the seizure operation. A memo was issued by FBI agent Lynne Zellhart to fellow agents describing the procedures for carrying out the raid.

The memo, which was approved by Moon, asked agents to assign ID numbers to “all cash” found inside the deposit boxes to be catalogued in the Consolidated Asset Tracking System, which the agency uses to organize forfeitures.

In order to seize assets according to U.S. forfeiture laws, the government must have evidence to prove that these assets were either the result of criminal activity or used to fund such activities.

Kim had also asked agents to identify owners of the deposit boxes and notify them that they could claim back their property, the Los Angeles Times reported.

After the seizure, the FBI posted a notice on the store’s window asking customers whose boxes were taken by the agency to step forward and claim it. However, once they did, they were subject to investigations, and the agency proceeded to look into their state tax returns and bank records.

Box holders whose property was seized have filed a class-action lawsuit alleging that their constitutional rights were violated by the FBI.

An 80-year-old woman identified in court documents as “Linda R.” lost 40 gold coins worth an estimated $75,000, which is believed to make up a significant portion of her life savings, Reason reported. Linda kept her retirement savings in the safety deposit vault as she did not trust the banking system.

In an interview with Reason in October 2021, Benjamin Gluck, a California attorney representing Linda, slammed the government for seizing his client’s savings.

“It was improper that the government seized these possessions in the first place, unconscionable that they are using them as hostages to pressure owners to divulge private information, and outrageous that they apparently treated the possessions so carelessly that they seem to have lost at least some of them,” Gluck said.

In an emailed statement to The Epoch Times, the FBI National Press Office said that the agents executed the search warrant based on evidence “outlined in the affidavit and an indictment already filed against the company,” and “at no time was a magistrate misled as to the probable cause used to obtain the warrant.”

“The FBI established and widely publicized a simple procedure for customers to have items returned and, to date, has returned tens of millions of dollars to boxholders. All of the items recovered during the search were safeguarded in government custody as the case progressed. This continuing criminal investigation related to a company that admitted it conspired with its customers to launder money has resulted in the company’s conviction.”