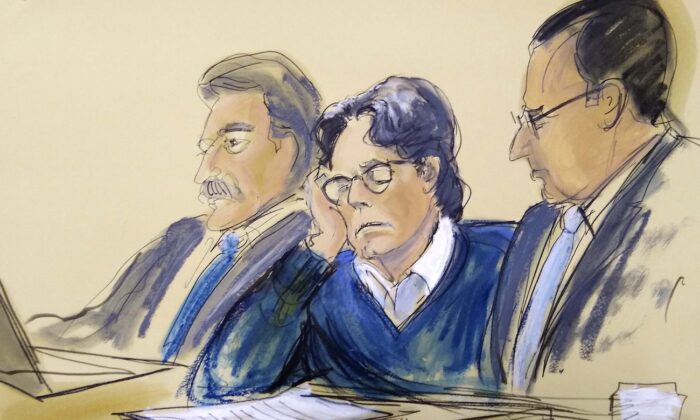 A convicted sex trafficker has accused the FBI of doctoring evidence in his case, which is under appeal.

Keith Raniere, the former leader and founder of NXIVM, was sentenced to 120 years in October 2020 after a federal jury found him guilty of sex trafficking, forced labor conspiracy, and racketeering. Raniere’s alleged crimes have been the subject of multiple documentaries, including HBO’s August 2020 series The Vow.

While an appeal hearing is set for May 3 for Raniere, he said on April 28 that he has come into possession of evidence that could overturn his entire case. According to Raniere, the FBI manipulated digital photos to make it appear as if he had photographed a female under the age of 18.

“Specifically, there is evidence that computer data related to digital photographs taken of a nude female were materially altered to make it appear that these photographs were taken in 2005,” Raniere’s motion states. “The government used the year 2005 to establish the female as being under the age of eighteen, making the photographs contraband.”

Raniere’s motion contains sworn statements from three digital forensic experts, including one who worked for the FBI for 20 years.

Retired FBI special agent Richard Kiper, who was a computer forensic examiner for the bureau from 1999 to 2019, said in his sworn statement that he believes there was evidence tampering in Raniere’s case.

“In my 20 years serving as an FBI agent, I have never observed or claimed that an FBI employee tampered with evidence, digital or otherwise. But in this case, I strongly believe the multiple, intentional alterations to the digital information I have discovered constitute evidence manipulation,” Kiper said.

“My analysis demonstrates that some of these alterations definitely took place while the devices were in the custody of the FBI. Therefore, in the absence of any other plausible explanation, it is my expert opinion that the FBI must have been involved in this evidence tampering.”

Among his findings are dates, file names, and timestamps of digital photos being altered while in FBI possession, Kiper says. He also said photos were manipulated to appear as though they came from Raniere’s computer hard drive when they were actually placed there manually.

They agreed with Kiper’s findings.

“This is either a rookie mistake or a purposeful act of digital sabotage.”

“I believe, based on what I have reviewed, that Dr. Kiper is correct in his assessments that no plausible explanation exists for the anomalies in the Government’s exhibits other than intentional tampering on the part of the Government,” Norris said.

Raniere seeks a new trial, as well as a stay of his scheduled May 3 appeal hearing. Federal prosecutors responded to his motion on the same day, calling Raniere’s accusations against the FBI “frivolous.”

According to federal prosecutors, any potential FBI doctoring of digital evidence wouldn’t affect Raniere’s conviction because his victim has testified that he photographed her nude when she was 15.

“The crux of Raniere’s argument appears to be that the Federal Bureau of Investigation manipulated ‘computer images and photographs’ of Raniere’s victim Camila ‘to make it appear that these photographs were taken in 2005,’ i.e., when Camila was a minor,” prosecutors said in their April 28 response.

“But, as noted in the government’s brief on appeal, Camila appeared at Raniere’s sentencing, and herself confirmed that ‘in September 2005, when she was still fifteen, [Raniere] took naked pictures of [her].'”

The U.S. Court of Appeals for the 2nd Circuit has yet to rule on whether Raniere’s May 3 hearing will be delayed pending the outcome of his April 28 motion.