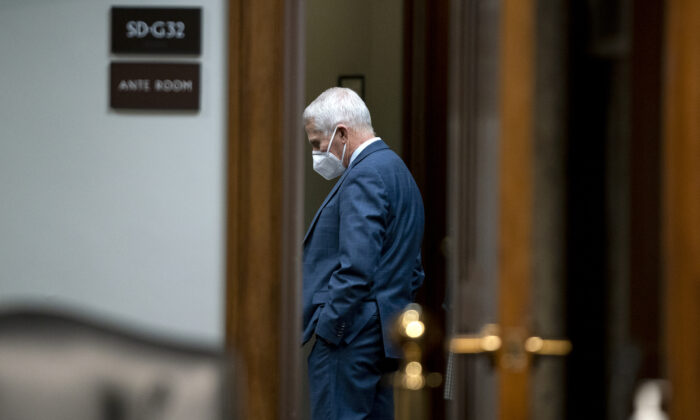 Such a probe has been discussed as Republicans inch closer to a House majority that would grant them subpoena powers. Some Republican lawmakers have accused Fauci of playing a role in misleading the public about the origins of COVID-19 and supporting pandemic mandates they describe as draconian.

While Atlas, a vocal critic of the NIAID head, is “very skeptical” that an investigation like this could get away from politics or the perception of it being political, he thinks it’s warranted. Fauci’s changing stance on certain COVID-19 policies needs to be put under the spotlight, Atlas recently said on EpochTV’s “Newsmakers.”

“The real, clear public airing of exactly what happened needs to be done,” said Atlas, a senior fellow in health care policy at the Hoover Institution and contributor to The Epoch Times.

“I personally am very skeptical that a political investigation, no matter who does it, is going to be done without politics, or if it’s going to be perceived as nonpolitical. I don’t trust people in government at all. They don’t deserve to be trusted, to be objective.

“What was the motivation to flip flop multiple times with policy?”

His question was referring to Fauci’s changing stance on pandemic school closures that drew criticism in late 2020.

He further questioned if there had been any “cover-up” of funding from the National Institutes of Health (NIH) in Fauci’s division, citing the awards to the Wuhan Institute of Virology through the New York nonprofit EcoHealth Alliance as an example.

EcoHealth Alliance, which continues to receive millions of dollars in grants from the NIH, was subjected to scrutiny by multiple federal agencies over its partnership with the Wuhan lab. The Office of Investigations of the Department of Health and Human Services in late 2020 briefly opened a probe over alleged “major fraud against the United States.” The probe was closed in January 2021, according to internal documents, which had the reasons for the closure redacted. The allegation states that “the COVID-19 virus was generated in … China with the assistance of an NIH Grant.”

Beginning in 2014, EcoHealth was the recipient of a $3.7 million grant to study bat coronaviruses in China. That grant was renewed through 2019 but suspended in 2020 because of compliance concerns. In August, the NIH ended the funding from the grant for the Wuhan facility after the lab at least twice rejected NIH’s request for lab notebooks and original files from the research.

“We cannot have illegal research being funded outside the country by American science” avoiding or circumventing the rules, Atlas said.

By the same token, Atlas also called for the Chinese regime to answer for its coverup of the initial outbreak, as well as its role in possibly causing the pandemic.

Besides a delayed admission of the outbreak’s severity to the world during the pandemic’s early days—behavior that Atlas called “unacceptable”—Beijing had “blocked real investigations” and “destroyed evidence of what happened,” he said.

“Of course they need to be held accountable,” he said. “It needs to be done, though, by a government and multiple governments that actually have the credibility and ethical focus to do that, and I think that that remains to be seen.”

Rep. James Comer (R-Ky.), the ranking Republican member of the House Oversight Committee, has vowed to summon Fauci in a planned probe of the origins of COVID-19 should the Republicans win the House.

“Why did Dr. Fauci lie for so long about American tax dollars through EcoHealth Alliance going to fund gain-of-function research? Why did he lie about gain-of-function research being done in the Wuhan lab? Why were we even in the Wuhan lab? There are so many questions that the Americans deserve answers to,” Comer recently told the “Capitol Report” program of NTD News, a sister media of The Epoch Times.

“The American people deserve answers and anyone that was involved in any type of cover-up should be held accountable.”

Representatives for NIAID didn’t respond to a query from The Epoch Times by press time.