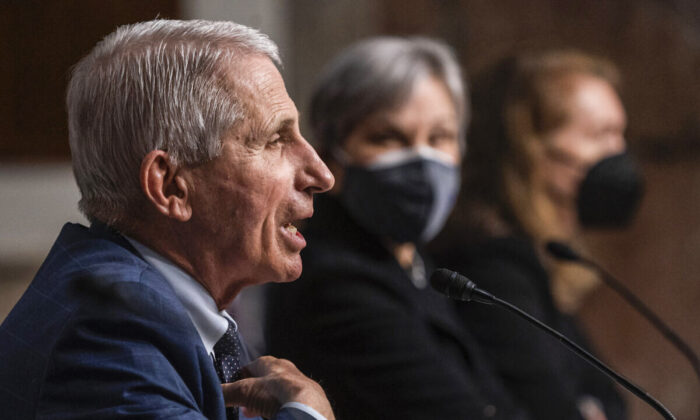 The National Institute of Allergy and Infectious Diseases (NIAID), headed by White House coronavirus response team member Dr. Anthony Fauci, allegedly has been funding an experiment in which male monkeys were subjected to feminizing hormone treatments, according to an animal rights organization.

The People for the Ethical Treatment of Animals (PETA) said NIAID paid around $205,562 to nonprofit Florida-based medical research facility Scripps Research to conduct the experiment, in which scientists expose male rhesus macaques to hormone therapy.

The experiment was conducted to see if it would make the test subjects more susceptible to human immunodeficiency virus (HIV), allowing scientists to study HIV rates in transgender women, PETA said.

Titled “A nonhuman primate model to study the immunological effects of feminizing hormone therapy in transgender women,” the experiment was given the funding by NIAID in December 2021, the Washington Free Beacon reported.

“Since activated CCR5+ CD4+ T-cells are highly permissive to HIV infection, a better understanding of how FHT [female hormone therapy] impacts the male immune system may provide new insights into how to prevent HIV infection in TGW [transgender women],” researchers wrote in their study. “In this regard, here we will model FHT in nonhuman primates to prospectively address two knowledge gaps about the impact of FHT on the male immune system.

“To that end, FHT will be modeled in male rhesus macaques to determine whether it increases the availability of HIV ‘target’ cells in the gut mucosa and whether FHT interferes with a prophylactic immune intervention. Ultimately, this project will advance our understanding of the pharmacodynamics of FHT and how it affects immune responses in biological males.”

However, Dr. Katherine Roe, a neuroscientist with PETA, told The Washington Free Beacon that the experiment was pointless and ineffective, given that monkeys can’t contract HIV but only Simian Immunodeficiency Virus, a milder form of the disease.

“It’s just bad science to suggest that dosing monkeys with feminizing medication makes them good stand-ins for humans,” Roe said. “This study will not help to prevent or treat HIV and will not help transgender women.”

PETA Senior Vice President Kathy Guillermo told Fox News on Jan. 12 that the monkeys who were involved in the experiment were placed in horrible and cramped conditions throughout the study.

“They take male monkeys [and] … put them in metal boxes—that’s where they’re forced to live,” Guillermo said. “They subject them to so-called hormone treatment. And from that, they’re supposed to learn something about HIV transmission. … This is a study that could be done with human volunteers, and we might actually find something out that would help human beings.”

Guillermo said that PETA had communicated to Fauci its grievances regarding the alleged experiment, which they believe to be a waste of taxpayers’ money.

“We wrote to Fauci last month, and we pointed out that HIV experiments on monkeys have killed tens of thousands of monkeys. They’ve cost us billions of dollars, and we have no vaccine to prevent HIV. Now, you would think that four decades of utter failure would inspire NIH (National Institutes of Health) to try something different, but they haven’t so far.”

“I think it says you’re not a very good human being,” she said of the research.

The NIAID is one of the more than 20 institutes and centers that make up the NIH.

Scripps Florida told the Free Beacon in a statement that testing “sub-populations” is vital to discovering effective treatments for fatal diseases.

“The research you reference concerns a sub-population of people at greater risk of HIV infection, and factors that may or may not affect their response to a treatment/preventative approach in development,” a spokeswoman said. “It is through these types of targeted research studies that substantive progress against HIV, cancer, ALS, dementia—indeed most diseases and conditions—will be made.”

When contacted for comment, a representative from NIAID referred The Epoch Times to information regarding the study but declined to comment further.

Scripps Florida didn’t respond to a request by The Epoch Times for comment by press time.