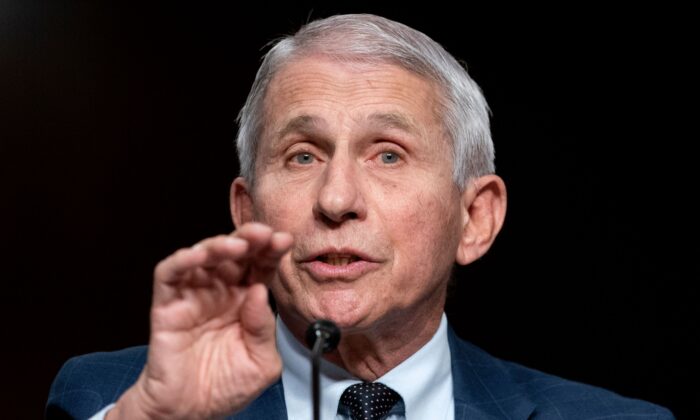 Dr. Anthony Fauci, director of the National Institute of Allergy and Infectious Diseases, testifies to a congressional panel in Washington on Jan. 11, 2022. (Greg Nash/Pool/AFP via Getty Images)
By Mark Tapscott

Dr. Anthony Fauci’s net worth almost doubled during the years spanning the COVID-19 pandemic, according to financial disclosure forms obtained through litigation by a nonprofit government watchdog.

“The Fauci household disclosed net worth increased from $7.6 million (Jan. 1, 2019) to over $12.6 million (Dec. 31, 2021),” according to OpenTheBooks.org (OTB) CEO and founder Adam Andrzejewski, writing on Substack, about the financial position of the director of the National Institutes for Health’s (NIH) National Institute for Allergies and Infectious Diseases (NIAID).

Fauci also is chief medical adviser to President Joe Biden, and held a similar position under former President Donald Trump from the outset of the pandemic in 2020.

In addition, he’s the highest-paid federal employee, earning more than $456,000 in 2021 in compensation. His federal salary increased to $480,000 in 2022, topping that of the president, vice president, and Supreme Court justices.

“During the ongoing pandemic year of 2021, the Fauci’s household income, perks and benefits, and unrealized investment gains totaled $2,832,876—including federal income and benefits of $903,497; outside royalties and travel perks totaling $919,205; and $910,174 in investment gains,” Andrzejewski wrote.

Fauci’s finances were further augmented by a $1 million award he received for the Dan David Prize at Tel Aviv University in Israel. Fauci kept more than $900,000 of the award, with the rest going to fund scholarships, according to his disclosure forms.

“Fauci also collected awards of $12,500 from the Eliot Richardson Prize in Public Service on July 31, 2021, and the Abelson Prize from the American Association for the Advancement of Science on Feb. 8, 2021,” Andrzejewski continued.

Fauci didn’t respond by press time to a request by The Epoch Times for comment.

Four separate federal lawsuits have been filed by OTB in its efforts to force the NIH to make public data concerning royalties valued at $134 million paid to more than 1,600 of the agency’s executives, scientists, and researchers by outside firms thought to be primarily from the pharmaceutical industry, between 2010 and 2014.

The royalties were first reported by The Epoch Times in May.

Based on the numbers for that period, OTB projects that about $350 million in such royalty payments were made by outside payers to NIH employees between 2010 and 2020.

Royalty payments also went to at least three of the top echelon of NIH leaders, including Dr. Francis Collins, the immediate past director of NIH, who got 14 payments. Fauci received 23 payments and Fauci’s deputy director at NIAID, Clifford Lane, received eight payments.

Collins resigned as NIH director in December 2021 after 12 years at the helm of the world’s largest public health agency.

His acting successor, Dr. Lawrence Tabak, conceded during a congressional hearing earlier this year that “there may be an appearance of a conflict of interest” in the royalty payments.

Fauci’s wife, Christine Grady, also is highly compensated and is listed on the NIH website as “senior investigator” and “chief of the Department of Bioethics at NIH’s Health Clinical Center.”

Her title is currently listed by the U.S. Office of Personnel Management as “social science” with a pay level of $238,970, according to data compiled by OTB. The current top pay rate for federal government executive-level officials is $226,300.

Grady’s compensation is at the center of one of the four OTB suits as a result of NIH officials’ refusal to disclose information sought via an OTB Freedom of Information Act (FOIA) request dated April 8. The lawsuit was filed in the U.S. District Court for the District of Columbia.

The OTB request sought “all employment contracts, modifications, and addendums” for Grady since assuming her present position, as well as “all confidentiality agreements/documents, conflicts of interest waivers or documents, ethics disclosures, and financial interest and/or economic interest disclosure documents.”

All federal employment jobs are required by law and regulation to have an official position description that describes the specific duties and responsibilities for which the individual can be held accountable.