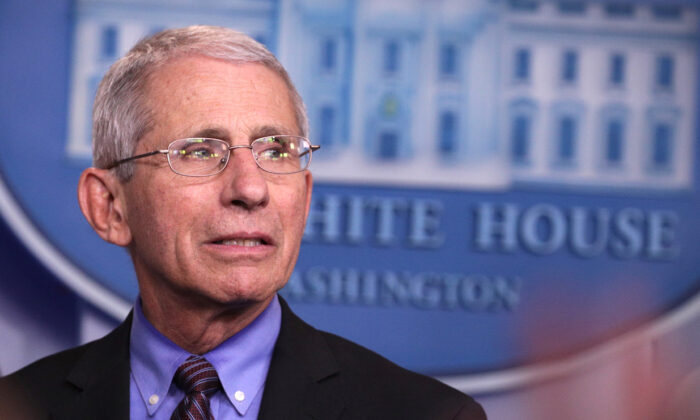 Fauci’s Message to Americans on Reopening: ‘Don’t Be Overconfident’

Dr. Anthony Fauci, director of the National Institute of Allergy and Infectious Diseases, warned Americans about getting complacent in the face of possible upticks in COVID-19 infections as more parts of the country reopen.

Asked by CNN’s Jim Sciutto on Wednesday if he had seen any “worrisome signs” suggestive of potential outbreaks in regions that were moving to reopen more aggressively, Fauci acknowledged “a little bit of an uptick” in some areas and urged people to stay vigilant against the virus.

“One thing that I think the people who are out there frolicking need to realize—that when you do that, and you see no negative effect in one week, please don’t be overconfident because the effect of spreading is not going to be seen for two, three, maybe even more weeks,” Fauci told CNN in a May 27 interview.

While Americans across the country mostly settled for small processions and online tributes instead of parades Monday as they observed Memorial Day in the shadow of the pandemic, the weekend also saw crowded beaches and recreation spots.

Missouri’s health director issued a dire warning Monday after photos and video showed weekend revelers partying close together. One video posted on social media showed a crammed pool at Lake of the Ozarks. Many of those seen in the video were young people, who may not experience symptoms.

“When they then carry the virus and transmit it to a more vulnerable person, this is when we tend to see the long-lasting and tragic impact of these decisions that are being made,” said Missouri Department of Health and Senior Services Director Randall Williams.

Fauci, in Wednesday’s interview, urged Americans to “be prudent” and follow guidelines on social distancing and other measures meant to contain the spread of the Chinese Communist Party (CCP) virus, the novel coronavirus that causes COVID-19.

He said a second wave of the deadly bug was not “an inevitability,” adding that reopening in line with official guidance and with an effective testing regimen in place would reduce the risk of a resurge.

President Donald Trump, at a briefing in the Rose Garden on Tuesday, was asked to convey a message to people who, on Memorial Day Weekend, were spotted “crowding pools, crowding boardwalks.”

White House press secretary Kayleigh McEnany, at a briefing Tuesday, echoed Trump’s remarks about the need to keep safety in mind as restrictions are lifted.

“The President, as he’s noted, he wants to see society reopen, wants to see the economy reopen, but we do want to do so safely,” McEnany said.

“Everyone, while you go out, let’s keep cognizant [of] the recommendations of the CDC because those, in the end, are very important to making sure that there is no spread of the virus,” the press secretary added.