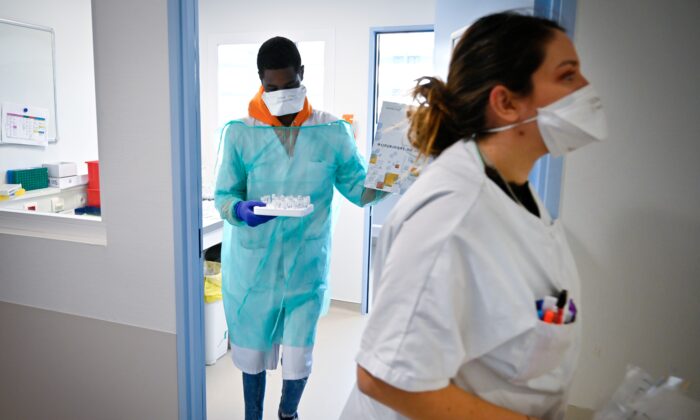 Medical staff work in the laboratory to analyze samples on the possible presence of COVID-19 in a file photo. (Gerard Julien/AFP via Getty Images)
By Jack Phillips

A National Institute of Allergy and Infectious Diseases official said the agency will further evaluate a controversial Boston University-commissioned preprint study that developed a COVID-19 hybrid that killed “80 percent” of lab mice, saying the team involved didn’t clear the work with the federal agency.

Speaking to STAT News, Emily Erbelding, the head of NIAID’s division of microbiology and infectious diseases, suggested that Boston University (BU) researchers didn’t properly disclose what their study would entail and didn’t say they would carry out that specific work. The grant proposal, Erbelding stated, also didn’t make it clear that scientists would possibly be enhancing a COVID-19 strain in reports that were handed to NIAID, the agency headed by Dr. Anthony Fauci.

This week, BU’s National Emerging Infectious Diseases Laboratories drew condemnation and controversy when it published (pdf) the non-peer-reviewed paper showing researchers took the spike protein for the COVID-19 Omicron strain and grafted it to the original Wuhan COVID-19 strain. They found that when tested on lab mice, the newly created strain is more lethal than the original Omicron variant—killing 80 percent of mice—although Erbelding noted that the original Wuhan strain killed 100 percent of those mice.

“I think we’re going to have conversations over upcoming days,” Erbelding told STAT on Oct. 18, suggesting the BU team didn’t inform NIAID about what they were planning to do. “We wish that they would have, yes.”

The university defended the research and pilloried what it described as misleading and false reports about the study, asserting that no gain-of-function research, which could enhance the lethality or transmissibility of a pathogen, was carried out during the research.

It also refuted claims made by Erbelding and NIAID in the STAT News articles, saying that it “fulfilled all required regulatory obligations and protocols,” and “following NIAID’s guidelines and protocols, we did not have an obligation to disclose this research for two reasons.”

“The experiments reported in this manuscript were carried out with funds from Boston University. NIAID funding was acknowledged because it was used to help develop the tools and platforms that were used in this research; they did not fund this research directly,” according to the statement.

“[National Institutes of Health] funding was also acknowledged for a shared instrumentation grant that helped support the pathology studies. We believe that funding streams for tools do not require an obligation to report.”

And “secondly, there was no gain of function with this research,” the university stated. If “there was evidence that the research was gaining function, under both NIAID and our own protocols we would immediately stop and report. All research at Boston University, whether funded by NIAID or not, follows this same protocol. We are in continued conversation with NIAID leadership and program officers.”

Following reports about the study, however, some groups and conservative lawmakers expressed alarm.

Sen. Roger Marshall (R-Kan.), a doctor, issued a statement that such research shouldn’t be carried out in “densely populated areas” because it creates the “potential to kill more people than any singular nuclear weapon.”

“History has taught us that viruses have managed to escape even the most secure labs. This is not a risk that scientists alone should be able to take without concurrence from the American public. This research must stop immediately while the risks and benefits can be investigated,” he said in a statement.

The senator made reference to the federal government having provided funding to a third-party group to carry out possible gain-of-function research at a top-security laboratory in Wuhan, China—located in the same city where the first COVID-19 cases were recorded in 2019. Some U.S. intelligence officials issued a report in 2021 that the virus may have escaped from a lab.