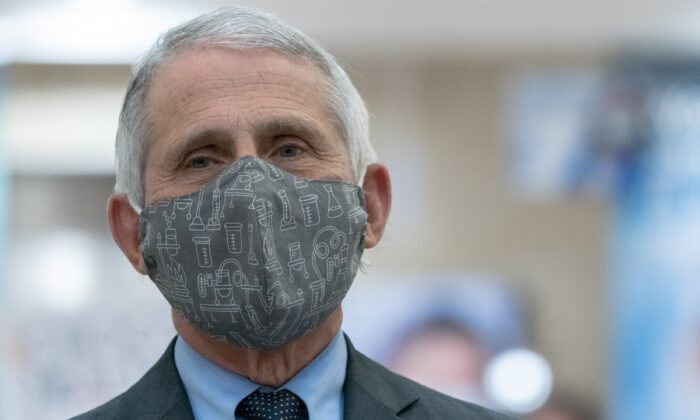 A top U.S. health agency failed to oversee risky experiments funded by taxpayer money and conducted at the Chinese laboratories near where the CCP (Chinese Communist Party) virus was first detected, according to three lawmakers.

The National Institute of Allergy and Infectious Diseases (NIAID), headed for decades by Dr. Anthony Fauci, was supposed to be notified by a nonprofit called the EcoHealth Alliance if experiments done with U.S. taxpayer money at the labs in Wuhan resulted in a one log (10 time-increase) in growth.

One of the experiments, which saw researchers expose humanized mice to a modified bat coronavirus, produced an increase of more than three logs, but EcoHealth did not stop the experiment nor did it alert NIAID, lawmakers said in a letter (pdf) to the NIAID’s parent agency that was made public on Nov. 3.

“As a result, NIAID’s oversight of the grant failed to detect the viral growth issue and, notably, did not hold EcoHealth accountable for violating the terms of its grant,” the members of Congress wrote.

The trio, along with Rep. James Comer (R-Ky.), have been probing the research, which has received $3.7 million from NIAID and started in 2014.

The NIAID is part of the National Institutes of Health (NIH).

Documents sent to the lawmakers from the NIH last month showed, according to some experts, that the experiments funded by the NIAID constituted gain-of-function, a term generally used to describe experiments that increase the transmissibility and/or pathogenicity of a biological agent.

Dr. Francis Collins, the head of the NIH, and Fauci claimed earlier this year that the agency had not funded gain-of-function experiments in China. Following the release of the new documents, they shifted the explanation, implying that gain-of-function was funded but arguing it didn’t meet the narrower threshold laid out in a federal framework (pdf) established in 2017.

Before, experiments that involved generating agents expected to be “transmissible among mammals” and might accidentally cause human infections were supposed to reviewed. Now, research triggers heightened oversight only if it alters pathogens “likely capable of wide and uncontrollable spread in human populations.”

The U.S. government paused funding for numerous gain-of-function experiments in 2014 but lifted the pause in 2017.

The NIH in 2014 informed EcoHealth that the research that eventually was done in Wuhan may include gain-of-function experiments subject to the pause, according to a letter reviewed by congressional staff members in a closed-door meeting last month. The letter is one of a number of correspondences between the agency and EcoHealth that have not been made public.

Dr. Peter Daszak, EcoHealth’s president and chief scientist, asserted in a reply that the experiments would not trigger a heightened review because the bat coronavirus researchers wanted to modify “has never been demonstrated to infect humans or cause human disease,” according to notes taken by the staffers in the closed-door meeting.

NIAID determined in 2016 that the work was not subject to the pause, citing two of the justifications provided by EcoHealth as the basis for the decision, the NIH informed EcoHealth on July 7, 2016, in another letter that has not been released to the public.

However, the agency inserted into the grant the requirement that Daszak must stop all experiments immediately and report to the NIAID if there was any evidence of a virus growing by 1 log or more.

The experiments on humanized mice ended up significantly increasing the viral load in the mammals.

Lawmakers said that the representations by both NIAID and EcoHealth that the mice experiments would be expected not to increase pathogenesis “seem at odds with the stated goals of the research project to look for dangerous viruses with pandemic potential,” noting that the assessments also turned out to be wrong.

After the results of a 2015 experiment conducted by Ralph Baric and other researchers, EcoHealth and NIAID should have examined the research proposal more closely “before reaching the conclusion that the expected results of the experiment would be less pathogenic,” they said.

“It seems unlikely that EcoHealth and NIAID were unaware of the findings in the 2015 paper. Thus, we are left with the impression that both chose to document the research as less dangerous so that EcoHealth could continue to receive its funding and NIAID could avoid outside oversight of that research proposal,” they wrote.

Further, while the NIH in April 2020 suspended the grant that funded the experiments due to non-compliance with its requirements, the agency issued nearly $367,000 to EcoHealth in mid-2020, which the lawmakers say raises concerns about how the NIH conducts oversight of grantees, and may have violated the Anti-Deficiency Act violation.

EcoHealth was granted two different awards by the NIH in August 2020 totaling over $4 million.

The lawmakers sent a list of questions they want answered by Nov. 10, including who authorized the funding in mid-2020 and all correspondence between EcoHealth and the NIH.

EcoHealth, NIAID, and the NIH didn’t respond to requests for comment. Fauci is scheduled to appear before a Senate panel on Thursday.