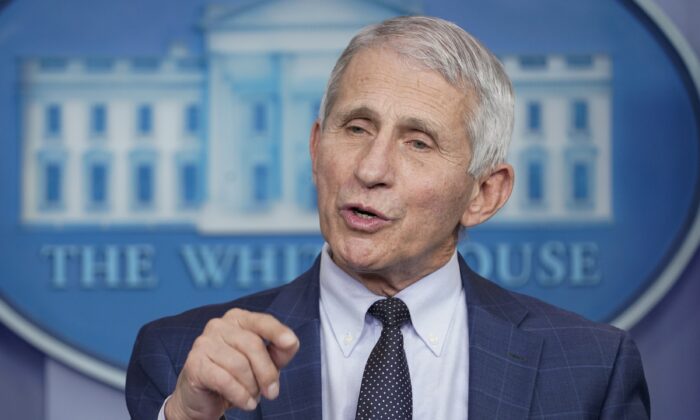 Dr. Anthony Fauci, director of the National Institute of Allergy and Infectious Diseases, speaks during a briefing in Washington on Dec. 1, 2021. (Susan Walsh/AP Photo)
Executive Branch

Dr. Anthony Fauci said in a new interview that he is considering stepping away from the position he’d held since 1984.

Fauci, the longtime director of the National Institute of Allergy and Infectious Diseases (NIAID), was asked during a podcast released March 18 whether he was mulling retirement or transitioning to a less-demanding job.

“I can’t stay at this job forever, unless my staff is going to find me slumped over my desk one day. I’d rather not do that,” he added.

Fauci was appointed to his position in 1984 during the Reagan administration.

Fauci’s comments came after Sen. Rand Paul (R-Ky.) failed in his effort to get support for a measure that would eliminate the NIAID and create three new institutes in its stead.

Paul, who has clashed with Fauci during multiple congressional hearings, said Fauci has become has become a “dictator-in-chief.”

“No one person should have unilateral authority to make decisions for millions of Americans,” Paul, a doctor, said.

Fauci and his agency had not responded to requests for comment on the measure.

Paul and other Fauci critics have taken issue with how the doctor misled the public on his agency’s funding for the Chinese lab located near the first cases of COVID-19 were recorded, his support for harsh measures during the pandemic, and his admission that he lied about the effectiveness of masks because of worries there wouldn’t be enough for health care workers.

Fauci, who has also been preparing for investigations Republicans have pledged into the COVID-19 response, has called Paul a partisan whose accusations aren’t rooted in facts.

Without mentioning Paul, the podcast host asked Fauci in the new interview whether he would leave his post soon, noting that besides Dr. Francis Collins, who exited from his position as director of the National Institutes of Health in late 2021, Jeffrey Zients was stepping down as the White House COVID-19 response coordinator.

“I have said that I would stay in what I’m doing until we get out of the pandemic phase, and I think we might be there already,” Fauci said. “If we can stay in this, then we’re at a point where I feel that we’ve done well by this. But I don’t have any plans right now to go anywhere, but you never know.”

The doctor also said he doesn’t have many interests outside of health.

“I unfortunately am somewhat of a unidimensional physician-scientist-public health person. When I do decide I’m going to step down—whenever that is—I’m going to have to figure out what I’m going to do,” he said. “I’d love to spend more time with my wife and family. That would be nice.”