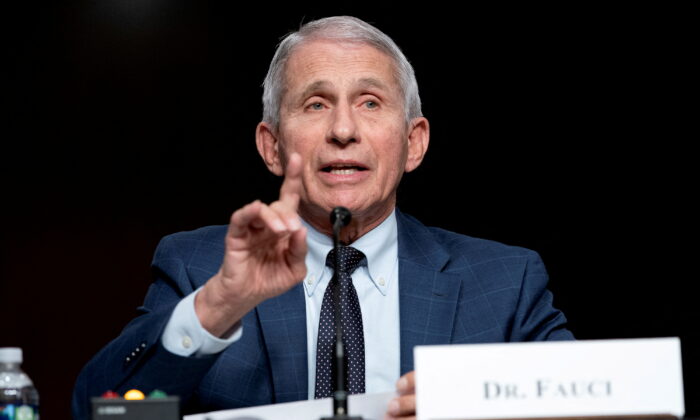 Dr. Anthony Fauci, director of the National Institute of Allergy and Infectious Diseases, responds to questions during a congressional hearing in Washington in a file image. (Greg Nash/Pool via Reuters)
By Michael Washburn

White House chief medical advisor Dr. Anthony Fauci said that Chinese officials were “extremely secretive” about the possible origins of the COVID-19 pandemic, though he stopped short of accusing Beijing of deliberately covering it up.

The director of the National Institute of Allergy and Infectious Disease was asked on BBC’s “Sunday Morning” program on March 27 what his response was to claims by World Health Organization (WHO) investigators that China prevented them from “seeing key details and from speaking to key people” when they were probing the pandemic origins in Wuhan in early 2021.

“You know, I don’t want to create any or mention any disparaging remarks about that,” Fauci responded.

“But the Chinese are very closed, in a way of being very reluctant, particularly when you have a disease that evolves in their country, they become extremely secretive, even though there’s no reason to be secretive,” he continued.

Fauci then suggested that embarrassment over global reactions may have driven the Chinese regime to be less than totally forthcoming on the origins and spread of COVID-19.

“I think they were very concerned and maybe embarrassed that the virus evolved from their country but there’s nothing wrong with that,” he said.

“So when they see something evolving in their own country, they tend to have a natural reflex of not necessarily covering things up, but not being very open and transparent.”

U.S. officials and others have repeatedly decried Beijing’s denying access to key data and facilities amid ongoing investigations to find out the source of the pandemic.

In addition, the Chinese regime in the early stages of the initial outbreak in Wuhan suppressed information about the severity and spread of the disease, allowing the virus to transmit around the world that was still unaware of the dangers of the new coronavirus.

Many lawmakers and experts have accused the communist regime of covering up both the origins of the pandemic and the initial spread of the outbreak.

At the heart of the debate on the source of the outbreak is whether it leaked from a laboratory in Wuhan or if the virus was transmitted naturally before jumping to humans. While there are proponents for both theories, the Chinese regime’s refusal to allow independent scrutiny of the lab makes it extremely difficult to fully investigate the matter.

Admitting that he was “never certain” in the early days about when and where COVID-19 might have originated, Fauci said that the similarities he observed between Covid-19 and such earlier diseases as SARS CoV-1 in the early years of the millennium suggested a possible origin for the current pandemic.

“I said, as did many other virologists, that the most likely etiology was a jumping species from the animal to the human,” Fauci commented.

Fauci added that he does not see anything suspicious about the existence of a research laboratory in Wuhan and this fact does not influence his view of the Chinese regime’s conduct in the matter.

“It’s not at all surprising that there is a research lab there. The Chinese were trying to figure out, and did figure out, what the original etiology was of SARS CoV-1,” he said, referring to the SARS virus that spread from China from 2002 to 2003. Scientists ultimately traced that virus to horseshoe bats in China’s Yunnan, which jumped to the intermediary of Asian civets before spreading to humans.

“[The SARS outbreak] made it very very clear there would be a possibility we would have another pandemic outbreak from the animal-human interface, so it makes sense that the Chinese would be studying this to find out how you could prevent another outbreak,” Fauci said.

Emails disclosed earlier this year suggested that Fauci not only initiated efforts to cover up evidence pointing to a lab origin of COVID-19 but actively shaped a highly influential academic paper that excluded the possibility of a laboratory leak.