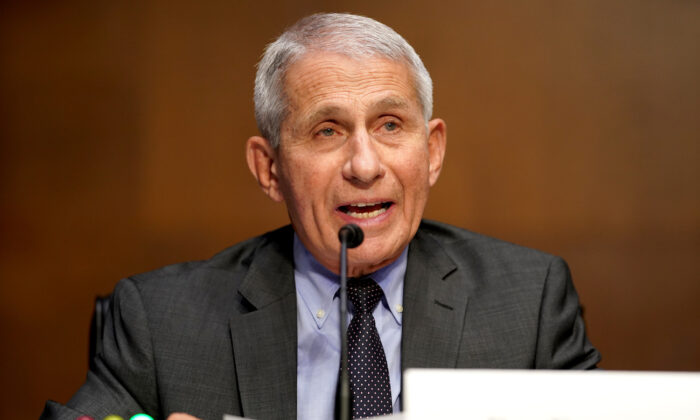 Dr. Anthony Fauci, director of the National Institute of Allergy and Infectious Diseases, at a Senate hearing in Washington, on May 11, 2021. (Greg Nash/Pool/Getty Images)
Vaccines & Safety

Fauci: Not Clear If New COVID-19 Strain Can Evade Vaccines

White House COVID-19 adviser Anthony Fauci said U.S. scientists and other researchers are studying whether a newly discovered CCP virus variant can evade common vaccines, although he stressed that it’s not clear whether the new strain is currently spreading in the United States.

On Friday, European countries signaled they would close off travel to certain southern African nations, including South Africa, due to the emergence of the variant.

Fauci, the head of the National Institute of Allergy and Infectious Diseases (NIAID), told CNN on Friday that officials “don’t know that for sure right now” about whether the new CCP (Chinese Communist Party) virus strain has the ability to evade vaccines.

“We want to find out, scientists to scientists, exactly what is going on,” Fauci said. “But it’s something that has emerged in South Africa and seems to be spreading at a reasonably rapid rate, in the sense of when they do test positivity they’re seeing it’s a bit more widespread in South Africa than was originally felt a couple of days ago.”

Japan, Israel, the UK, and Hong Kong also began issuing new travel curbs on Friday over the COVID-19 strain, which doesn’t have a name yet and has only been identified as the B.1.1.529 variant. For example, UK officials said travel restrictions were placed on South Africa, Botswana, Namibia, Zimbabwe, Eswatini (formerly Swaziland), and Lesotho.

Meanwhile, the head of the European Commission, announced on Friday the 27-nation European Union is also strongly considering travel restrictions.

But amid the swath of new restrictions, World Health Organization officials warned that more information is needed before countries start implementing travel restrictions.

On Friday, Lindmeier confirmed WHO is holding an emergency meeting on the variant and may possibly give it a name like “Delta” or “Alpha.”

When asked Friday about whether the variant is in the United States, Fauci replied that “anything is possible, but added: “We don’t know that. There’s no indication that it is right now. It seemed to have been restricted.”

“There were some cases that originated in South Africa and that went to Botswana and people who traveled and found out they were infected and one that had gone, actually, to Hong Kong,” he said, adding that the variant has seen “a lot of travel.”

And “once you test it, you’ll know for sure whether or not it does or does not evade the antibodies that we make, for example against the virus through a vaccine or following convalescing after you get infected,” Fauci said. “When you get antibodies, do those antibodies protect you against this new virus?”

“The answer is we don’t know right now, but we’re going to find out for sure.”