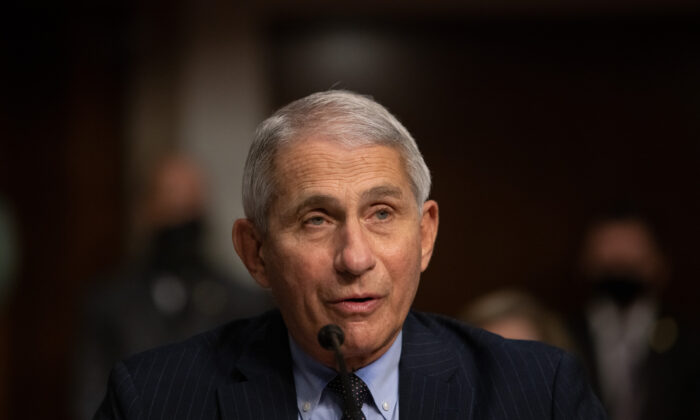 Dr. Anthony Fauci, director of National Institute of Allergy and Infectious Diseases, testifies at a Senate Health, Education, and Labor and Pensions Committee on Capitol Hill in Washington on Sept. 23, 2020. (Graeme Jennings/Pool/Getty Images)
By Jack Phillips

Speaking during a Fox News interview, Fauci told host Neil Cavuto that “one of the things that’s clear from the data [is] that … vaccines—because of the high degree of transmissibility of this virus—don’t protect overly well, as it were, against infection.”

But Fauci said later that the vaccines “protect quite well against severe disease leading to hospitalization and death” before he made note of his recent COVID-19 diagnosis.

“At my age, being vaccinated and boosted, even though it didn’t protect me against infection, I feel confident that it made a major role in protecting me from progressing to severe disease,” said Fauci, who is 81 and has worked in various capacities in the federal government since the late 1960s. He’s also headed the National Institute of Allergy and Infectious Diseases since the Reagan administration.

Fauci then said it’s because of the vaccination that it is “very likely why I had a relatively mild course.”

The official’s comments come just days after a bombshell study revealed that natural immunity, or the immunity conferred via a previous COVID-19 infection, provides superior protection against the virus when compared with vaccines.

Researchers in Qatar said that individuals who survived a COVID-19 infection and weren’t vaccinated had very high protection against severe or fatal disease.

“Effectiveness of primary infection against severe, critical, or fatal COVID-19 reinfection was 97.3 percent … irrespective of the variant of primary infection or reinfection, and with no evidence for waning. Similar results were found in sub-group analyses for those ≥50 years of age,” Dr. Laith Abu-Raddad of Weill Cornell Medicine–Qatar wrote.

But the researchers noted that both natural and artificial immunity conferred via vaccines waned over time. People who were previously infected with COVID-19 and were not vaccinated had half the risks of reinfection as compared to those that were vaccinated with two doses but not infected.

During an interview with the Washington Post this week, Fauci suggested that Americans aged 5 to 50 should be allowed to get a second booster shot.

Marina Zhang contributed to this report.