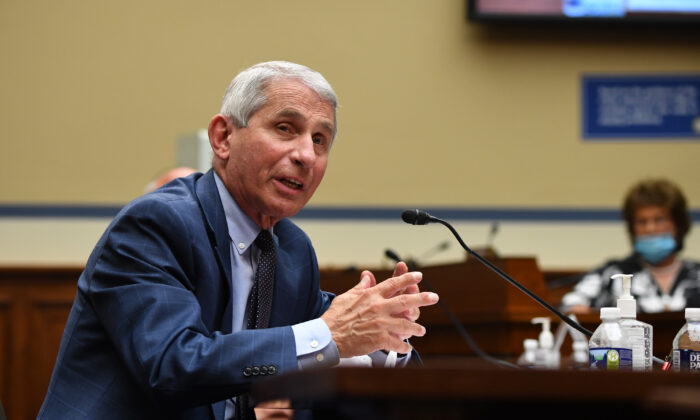 Dr. Anthony Fauci, director of the National Institute for Allergy and Infectious Diseases, testifies at a House hearing in Washington on July 31, 2020. (Kevin Dietsch-Pool/Getty Images)
AMERICA

The U.S. State Department and the U.S. National Institute of Allergy and Infectious Diseases (NIAID) were aware in January 2020 that Chinese authorities were withholding COVID-19 data, according to government documents obtained by a legal watchdog organization.

The U.S. National Institutes of Health (NIH) also sent “experts” from the NIH-supported P4 lab at the University of Texas Medical Branch to train Wuhan Institute of Virology technicians in “lab management and maintenance”—nearly two years before the onset of the COVID-19 pandemic—the records obtained by Judicial Watch through a Freedom of Information Act (FOIA) lawsuit show.

Judicial Watch President Tom Fitton said he believes the 90 pages of communication records between the NIH and the Wuhan lab show that Dr. Anthony Fauci’s agency, NIAID, has been “hiding information on China’s failure to provide essential data on COVID-19.”

On Jan. 8, 2020, staff at NIH and NIAID, led by Fauci, circulated an email from the U.S. Embassy in Beijing, “PRC Response to Pneumonia Cases Shows Increased Transparency Over Past Outbreaks, but Gaps in Epidemiological Data Remain.”

“Hi, here is the cable from US Embassy Beijing reporting on the pneumonia outbreak in Wuhan, China. It has ruled out SARS, MERS, and flu. [Redacted] confirmed it is viral infection,” reads an email to colleagues from Dr. Ping Chen, who had been NIAID’s top official in China.

Embassy officials in the email said they were concerned that a “lack of epidemiological data” hindered better risk assessment and response by public health officials. The officials noted that because of “gaps in [detailed] information” provided by the Chinese regime and “lack of a final confirmed pathogen,” the risk to the United States and global health is “difficult to assess at this time.”

The first known cases of COVID-19, the disease caused by the CCP (Chinese Communist Party) virus, were reported in December 2019 in Wuhan, China.

“As of January 7, the Wuhan Health Commission has reported 59 local cases of pneumonia with unknown cause,” the email reads.

Lab technicians from the Wuhan Institute of Virology were also directly trained by NIH-supported experts in April 2018.

“In addition to French assistance, experts from the NIH-supported P4 lab at the University of Texas Medical Branch in Galveston have trained Wuhan lab technicians in lab management and maintenance,” an April 19, 2018, email reads.

“The Wuhan institute plans to invite scientists from the Galveston lab to do research in Wuhan’s lab. One Wuhan Institute of Virology researcher trained for two years at the Galveston lab, and the institute also sent one scientist to U.S. CDC headquarters in Atlanta for six months’ work on influenza.”

Another email between the U.S. Embassy in Beijing and NIH headquarters on Feb. 23, 2018, shows that NIH officials were flagging “China Health News from Chinese Media.”

Among these media reports is an article from state-run outlet Xinhua, “Chinese scientists find how bats carry viruses without getting sick.”

Chinese scientists have identified “bats that harbor highly pathogenic viruses like Ebola, Marburg and SARS coronavirus but do not show clinical signs of disease,” according to the report.

“According to researchers, in humans and other mammals, an immune-based over-response to one of these and other pathogenic viruses can trigger severe illness,” the report reads.

U.S. intelligence officials and numerous experts have obtained evidence suggesting that the CCP virus originated in a lab, but other officials maintain that it originated naturally.

In September 2021, records obtained by The Intercept via a FOIA lawsuit against NIH showed that nonprofit EcoHealth Alliance funneled U.S. funds to scientists at the Wuhan Institute of Virology to research bat coronaviruses.

“The slow-rolling and stonewalling by Fauci’s agency on China, gain of function, and its COVID response generally is pure obstruction,” Fitton said.