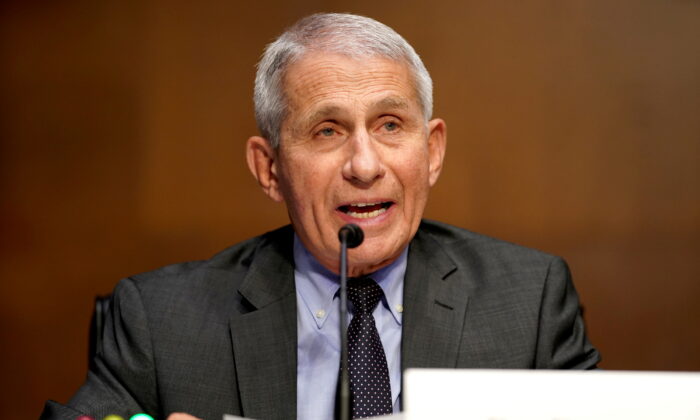 Dr. Anthony Fauci, director of the National Institute of Allergy and Infectious Diseases, gives an opening statement during a Senate Health, Education, Labor and Pensions Committee hearing to discuss the on-going federal response to COVID-19, at the U.S. Capitol in Washington, on May 11, 2021. (Greg Nash/Pool via Reuters)
AMERICA

Fauci: 40 to 50 Percent of His Agency’s Employees Are Not Vaccinated

Dr. Anthony Fauci, the head of the U.S. National Institute of Allergy and Infectious Diseases (NIAID), said that about 40 percent of his agency’s employees have not received the COVID-19 vaccine, while a deputy at the U.S. Food and Drug Administration (FDA) said the agency is reporting similar numbers.

During a Senate hearing, Sen. Richard Burr (R-N.C.) asked Fauci, the FDA’s Director of the Center for Biologics Evaluation and Research Peter Marks, and Centers for Disease Control and Prevention (CDC) Director Rochelle Walensky about the percentage of their employees that were vaccinated against COVID-19.

“I’m not 100 percent sure, senator,” Fauci said in response, “but I think it’s probably a little bit more than half. Probably 60 percent.”

Walensky said that CDC staff has “the option to report their vaccination status” and said the agency is encouraging federal employees to get vaccinated.

“The federal government is not requiring it, so we do not know” the vaccination percentage, Walensky said.

The Office of Management and Budget (OMB), in response to an inquiry about inconsistent access to vaccines, said that only “a small number of agencies” such as the Department of Defense or Department of Veterans Affairs distribute vaccines directly to their employees, according to the Federal News Network.

“For the vast majority of agencies, their employees receive vaccinations through states and localities, pursuant to the prioritizations established by those jurisdictions,” said the OMB.

Meanwhile, within the military, the Marine Corps said that as of April 23, approximately 93,500 Marines had received the COVID-19 vaccine while 52,900 Marines have declined a shot, or about 36 percent. An additional 92,300 Marines have yet to be offered one.

In comments to the “Today” show on April 30, President Joe Biden said he might force the military to get the vaccine.

“I don’t know. I’m going to leave that to the military,” Biden said in response to a question about mandatory vaccines. “I’m not saying I won’t. I think you’re going to see more and more of them getting it. And I think it’s going to be a tough call as to whether or not they should be required to have to get it in the military, because you’re in such close proximity with other military personnel.”

The Epoch Times has contacted the CDC, NIAID, and the FDA for comment.