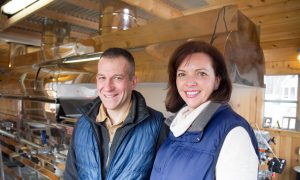 Father’s Heartfelt Warning Against Drug Use After Losing His Son

Mike Stollings of Ohio lost his 20-year-old son, but he vowed to push on and offer advice to others.

Stollings uploaded photo his son, 20-year-old Jeramie Ratliff, on Facebook just a few hours after his son’s body arrived at the funeral home. The photo, illuminated in purple light, shows a body on a gurney.

The grieving father said he would post the image as a precautionary tale to other parents.

He said his son overdosed on drugs after struggling with addiction.

Namely, Jamie overdosed, Stollings said, adding that he left behind a 10-month-old son. He suggested that he used cough syrup to get high.

“Lets take another look at how fun drugs are…………… this is my son about an hour after the funeral home got him late Monday afternoon. when he died he had been bleeding out of his ears and had blood in his hair and foam in his mouth. they were kind enough to clean him before we got there. his body was ice cold from being kept in a refrigerator. my cold dead son. father of a 10 month boy.”

“Grandson to 3 living grand parents. step-brother to 2. half brother to 3 son to 2 living parents and a step parent that helped raise him since he was a young child. all completely devastated. well little asher is too young to know what is going on but will live his life wondering what it would be like to know his dad. as many of you know Jeramie was pretty open about his relationship with LSD.”

“He was a little more quiet about his love for Dextromethorphan. despite the begging and pleading from me and many others in his family he craved the trip and was obsessed about it…………look i know that not everybody that takes drugs is going to die from it. but many do.”

“Jeramie thought he had it under control. he thought he was smarter than the drug and had more control than the drug. now he is in a refrigerator in a funeral home in Englewood. now people are in transit from all across this country to say their final goodbye’s. now my family has to spend over $5000 in funeral expenses. now i will never be able to hike with him or ride dirt bikes with him.”

“He will never be able to take his son camping………….those of you that use just for a little fun here and there. you don’t have to use but you like to party a little. think for a second about how there are those around you with larger mental issues. like jeramie, he was carrying some mental baggage that even i can’t comprehend. by partying with these people you encourage them and enable them to do it to use drugs as an escape.”

“Think about the influence you have on these people. think about the path of destruction being left behind…….people, learn from this. help make something positive from this tragedy. walk away from this lifestyle. find someone that loves you and ask them for help.”

“Don’t let this become you. don’t do this to your family. use our pain and anguish. learn from it. turn to someone you love. get help. if you do not have some you think you can turn to message me. i’ll do all in my power to help you. it’s not too late to save yourself and your family from repeating this horror. believe me when i say you do not want to experience this and you do not want your loved ones to have to experience this anguish.”

He added to local Ohio news outlet WHIO that he’ll always think about what he could have done.

“I’ll spend the rest of my days on this earth racking my brain trying to figure out what I should have done differently,” he said.

It’s not clear what kind of cough syrup his son ingested. The most commonly abused cough syrups are ones that contain dextromethorphan, or DXM, a dissociative drug that can produce hallucinations and out-of-body experiences.

According to WebMD, “A 2008 study found that one in 10 American teenagers has abused products with DXM to get high, making it more popular in that age group than cocaine, ecstasy, LSD, and meth. Although DXM products are quite safe when taken as recommended, high doses can cause hallucinogenic trips — and pose serious risks.”