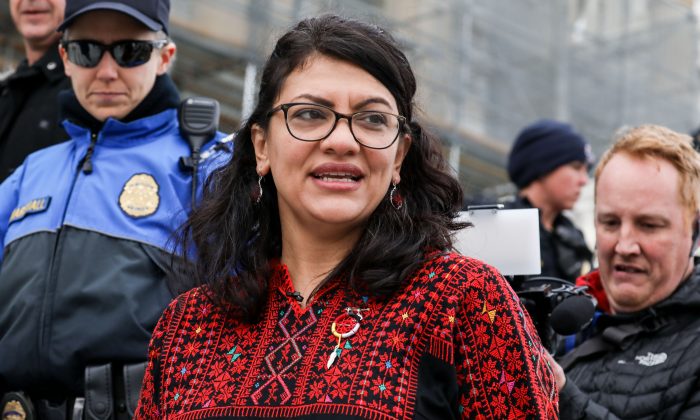 The father of U.S. Rep. Rashida Tlaib (D-Mich.) said that his daughter lied about where she lived in order to get elected.

Tlaib’s father Harbi Elabed made the accusation during a March 2010 interview with The Detroit News.

The newspaper article was scrubbed from the internet when The Detroit News migrated to a new website but was available in a subscription-based digital archive, according to the Daily Wire, a conservative news outlet that uncovered the article.

In an affidavit, Tlaib claimed that she lived in a house at 9123 Rathbone in Detroit. But the house at that location was owned in part by her father, who said that she didn’t live there.

Here’s the March 11, 2010, report in The Detroit News pic.twitter.com/rFe5lH0iLt

“She lied,” Elabed said. “She lied big-time to get elected. I never teach her that way. I teach her the right way. It’s my house. She didn’t live there. She lived in Dearborn in her house with her husband and boy.”

Dearborn was not a part of the district that Tlaib was elected to represent. While there’s no law that says a person must spend a particular amount of time at any of their houses, enabling politicians to have multiple houses and spend most of their time outside their district if they wish, perjury is an offense punishable by up to five years in prison and a $1,000 fine.

Tlaib said that her father was wrong.

“People have questioned that a lot, but never my father and I’m sad about that. The point is I complied with the law. I moved into the district before I filed. Period,” she said. She claimed to have bills proving where she lived but never produced them.

The article revealed bad blood between Elabed and Tlaib, the former claiming it stemmed from her siding against him in a custody battle, calling it “a complete breach of family values.”

Tlaib claimed that her father abused her when she was a girl, adding: “What do they say, you can’t choose your family?”

Tlaib, a Muslim, is part of a group of congresswomen elected in late 2018 representing the far-left wing of the Democratic Party, advocating for a slew of socialist proposals, such as the Green New Deal and “Medicare for All.”

Tlaib has come under fire for a number of reasons, including having prominent backers who posted pro-terror content and saying she feels more Palestinian in Congress than anywhere else.

In a recent interview, Tlaib said that she was  “really afraid of my fellow Americans” after the Islamist terror attack on the twin towers on 9/11.

“I was probably my second year in law school when 9/11 happened. And I was—I was really terrified of what was going to happen to my husband, who’s only a green card holder at the time,” she told Makers, a feminist media brand.

“I immediately called my brothers and told them to be very careful who you hang out with, telling my sisters, you know, just be real careful out there, and being really afraid of my fellow Americans. It really pushed me to be more involved, and I got really curious and really angry. And I think that combination got me, you know, in front of a number of issues in the city of Detroit.

After she used an expletive against Trump in a rant earlier this year calling for his impeachment, over 200,000 people signed a petition calling for her removal.