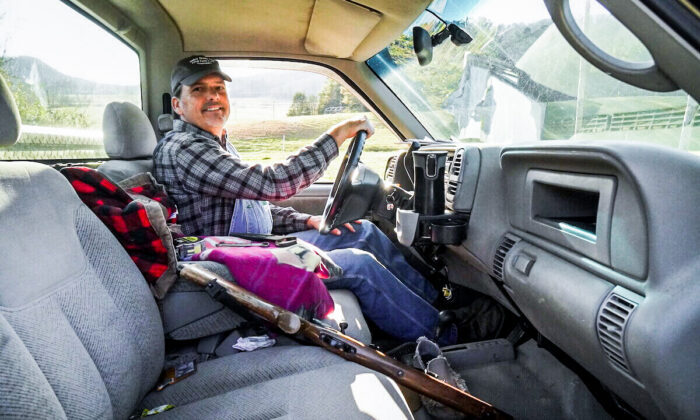 Farmer Mike Moyers sits in a truck with his tools at Valley Dream Farm near Knoxville, Tenn., on Dec. 2, 2021. (Jackson Elliott/The Epoch Times)
US News

Farmers have a long history of surviving painful economic situations, however,  the current simultaneous shortages of crucial supplies are straining their resilience.

They need fertilizer, pesticides, and machinery, but, in 2021, all these things have risen drastically in cost. For some families, 2022 might bring an end to generations in the farming business.

One of the most unusual things about farming is the generational nature of the business, farm managers Mike and Darlene Moyers said. The pair manage Valley Dream Farm near Knoxville, Tennessee.

“It does take a certain kind,” Darlene Moyers said. “You take somebody that loves this kind of work, and they will trade the highest-paid job in New York City for it, because it’s in their blood.”

Darlene and her sister Wilma Jordan were both raised on a farm. Jordan owns the farm.

A life in nature, the satisfaction of providing others with food, and the meaning inherent in building a business for the next generation all make farm work attractive, according to fourth-generation farmer and Nebraska Farm Bureau President Mark McHargue.

“When you’re actually taking care of the soil created by God, that is just such a long-term thought process. Almost everything we do, we’re thinking about how to make it better for the next generation,” he said.

But farming also has many challenges. Farmers don’t set their own prices, McHargue said. Some years, crops and animals cost more to grow than they do to sell.

And even seemingly simple crops often require resources from around the world, said Brant Wilbourn, the Texas Farm Bureau’s associate director of commodity and regulatory activities. Fertilizer, pesticides, and machinery are incredibly important.

“You basically need all three to have a successful crop,” he said.

It all starts with the seed, Wilbourn says. Different seed varieties have different resistance to pesticides and different responses to fertility.

“They can’t just switch, like, from one crop to another,” he said.

Then, farmers must fertilize their fields. Every year, crops need phosphorus, potassium, and nitrogen.

Without these chemicals, a farmer’s crop will be reduced by 40 percent to 70 percent, said Craig Hill, the president of the Iowa Farm Bureau Federation.

“Without phosphorus and potassium, you’ll lose some yield,” he said. “But if you don’t have nitrogen fertilizer to add to your corn crop, you are going to be in big trouble.”

This year, farmers faced an astronomical increase in fertilizer prices, by double or more, Hill said. However, as fertilizer costs began to rise, farmers decided to wait, not anticipating that prices would double.

“Farmers said, ‘This will be over soon,’” Hill said. “And then, here we are, with double our costs.”

Although China’s government doesn’t usually explain its policy decisions, Carson said he thinks that its leaders feel concerned about food shortages at home.

“China is trying to do everything it can to shore up its domestic production of food, because the Chinese Communist Party is increasingly terrified of economic dysfunction,” he said. “It’s worried about food price inflation even more than we are.”

King-Wilson added that these concerns will likely last into 2022, although supply chain issues remain unpredictable.

After this massive price increase, farmers, fertilizer producers, and fertilizer retailers have found themselves locked in a standoff.

If fertilizer costs drop, anyone who bought while it was expensive will lose money.

“They’re going to probably wait to the last minute to try to secure their products, hoping that they will go down,” he said.  “It’s going to be a really tough fight with the logistics trying to get this stuff there.”

The fertilizer price problem is only the first issue farmers have faced this year. As crops grow, they also face threats from an army of hungry pests—and pesticide prices also have risen.

Mike Moyers said he fights tomato-eating aphids using a saltwater-based pesticide. For the coyotes that slaughter his sheep, he keeps a scoped bolt-action rifle in his truck beside his wrenches and coffee cup.

“I lost 10 lambs last year because of coyotes,” he said.

Industrial farms often rely on less-precise chemical pesticides. Even with these, farmers lose 20 to 40 percent of their crop, according to CropLife International, an agriculture science study group.

Without pesticides, people only get the leftovers.

Pesticides are less time-sensitive than fertilizers, Hill said. Farmers put fertilizers in the ground either shortly before, or shortly after, planting crops. But farmers use pesticides as pests appear.

“You never know really what you’re going to need,” he said. “If you see a problem, then you go out and treat it. It doesn’t become a crisis until you need something.”

Pesticide costs are currently up 20 percent from 2020, according to the University of Nebraska–Lincoln. Farmers can only wait and hope that prices drop by spring, McHargue said.

“I’m hoping that prices will moderate a little bit.”

Unlike fertilizer and pesticides, spare parts for farm equipment are a consistent need. The consistent demands of farm labor eventually wear out machines.

Mike Moyers said that this year, his hay baler broke while he was twining the year’s last bale of hay.

As machinery failures go, this one wasn’t serious. But the Moyers’s entire farm depends on keeping his two $80,000 tractors running, he said.

“Tractors are probably the most valuable equipment here that we’ve got. Because you can’t really do anything without them,” Darlene Moyers said.

Most farmers keep spare parts on hand so they can fix problems like these, he said. But buying new parts can be painful.

“I’m able to buy everything,” he said. “The shipping cost is what’s hurting me right now if I want a part, because they don’t keep them.”

Tractors and other vehicles are important year-round, but they are critical during harvest season, said Mike Moyers.

Weather, disease, or pests can still kill crops before the harvest. A farmer can only number his crop once it’s in the barn. Every day it remains unharvested in the field adds risk.

Even if farmers don’t have working machinery during harvest, they might still get by, said Hill. They can use older machines or borrow equipment from a neighbor.

“The machinery shortage is an inconvenience, but we’ve got used machinery that we can draw upon,” he said. “If you can find a neighbor, or a salvage yard, you’ll be able to get around it.”

But these solutions may not work for everyone. Some people may not have spare machinery, while the culture of neighborliness between farmers isn’t as strong as it used to be, said Mike Moyers.

“I don’t say we don’t have neighbors that would help us out here, but that’s a thing that’s slowly going away,” he said. “We don’t have time. I know my neighbor is covered up busy, and I wouldn’t even bother.”

Farmers have little control over the hardships created from all the shortages. To many, the sudden price rise of commodities seems unfair.

According to Carson, the shortages result from a logistics system that has chosen efficiency over durability.

In the past three decades, the international environment has been unusually stable, he said. There have been few important international rivalries, few worldwide disasters, and few interruptions to normal shipping.

But today, rivalries with China and Russia, the Chinese Communist Party (CCP) virus, and logistics issues around the world have made these networks vulnerable, he said.

“Globalization of the past 30 years has been a historical anomaly,” he said. “And all we’re seeing is a reversion to the mean.”

There’s little to be done for global supply chain problems in the next couple of years, Carson said. To prevent future issues, businesses should move production back to America, stockpile some parts, and keep their factories close to their customers, he said.

However, “going into the 2022 growing season, things are kind of locked in stone,” he said.

BASF’s King-Wilson said the Germany-based company plans to move production to the United States, widen its global supplier base, and order new materials early in response to the shortage.

“In preparation of the unknown, BASF has already taken a number of steps to minimize the effect on our customers and our own operations,” King-Wilson said.

While companies adjust, farmers will have to cope with rising prices as best they can. To save costs and make money, farmers like the Moyerses are amazingly adaptive.

To save hay, Mike built improved sheep-feeding devices from logs on his property. He plans to switch to wood fires from propane to heat his greenhouse, and he uses his own sheep manure instead of buying fertilizer.

“Propane to run in greenhouses during a winter is very high cost,” he said.

Despite the difficulties, farm bureau presidents across the United States say they feel confident that farmers will endure.

“We’re so used to market fluctuations, and weather problems, and other things, that we’ll farm another year or two,” said Hill.

“It’ll be a frustration, it’ll be an aggravation but, knowing farmers as I do, we will, we will hit adversity head-on, adapt to our best ability, and keep moving.”