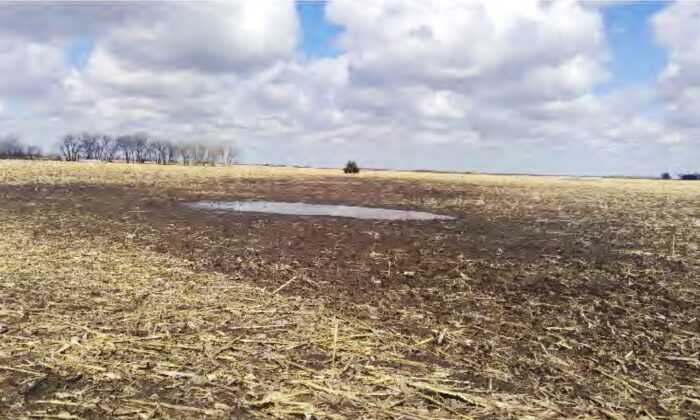 Farmers Sue Over Federal Regulation of ‘Mud Puddle’ on Their Land

A farming family is suing the federal government over its demand that they leave what the family argues is a mud puddle in the middle of their farm intact because it considers the ground to be a federally protected wetland.

The legal complaint in the case, Foster v. U.S. Department of Agriculture (USDA), was filed earlier this month in U.S. District Court in South Dakota. The lawsuit was filed by the Sacramento, California-based Pacific Legal Foundation (PLF), a national public interest law firm.

The puddle is about 0.8 acres in size and roughly eight inches deep.

The family’s rights “are being violated by being subjected to federal micromanagement of how they farm in order to protect a mud puddle,” Tony Francois, a senior PLF attorney, told The Epoch Times. “The suit when it is successful will allow them the freedom to use their property as they see best.”

“The government has no power to regulate how you use mud puddles on your property, but because they provide things like crop insurance assistance” the government has power over them, Francois said.

Arlen and Cindy Foster, third-generation farmers in Miner County, South Dakota, argue that the U.S. Constitution’s Commerce Clause doesn’t give Congress the authority to regulate an isolated farm field depression that neither collects nor discharges water as a wetland. They also contend that the government can’t condition the distribution of benefits—such as federal crop insurance—on recipients waiving their constitutional rights.

Along with their daughter, son-in-law, and six grandchildren, the Fosters raise cattle, corn, soybeans, and hay on land Arlen’s grandfather bought back in 1900 with a $1,000 loan.

The family is also proud of its conservation practices on the farm. These practices include no-till farming and preserving tree belts, according to a PLF summary.

One of the family’s conservation efforts has led to a present-day legal problem.

Arlen’s father planted a tree belt on the south side of the farm in 1936 to prevent erosion. That tree belt is much taller today and collects deep snowdrifts in the winter. As the weather warms, the melting snow collects in a low spot in the middle of a farm field before soaking into the ground or evaporating.

In 1985, Congress established the Erodible Land and Wetland Conservation and Reserve Program, the so-called Swampbuster Act, which restricts the use of wetlands in farm fields owned by recipients of USDA agricultural benefits. The Swampbuster Act defines wetlands as land that combines wetland hydrology, hydric soils, and the ordinary production of plants that grow well in wet conditions.

The statute disqualifies any person who drains a designated wetland and produces an agricultural commodity on it from eligibility for a wide variety of federally authorized agricultural benefit programs.

But the Fosters point out in their legal complaint that the disqualification from federal benefits isn’t supposed to apply to “artificial wetlands”—wetlands that are “temporarily or incidentally created as a result of adjacent development activity.”

The Swampbuster Act is not to be confused with the Clean Water Act, which gives the government authority to regulate interstate commerce by prohibiting discharges into the nation’s “navigable waters,” forbidding “any addition” of pollutants from “any point source” to such waters without a permit.

Property owners have long resented what they characterize as the U.S. Environmental Protection Agency’s excessive prosecutorial zeal as it—along with the U.S. Army Corps of Engineers—have treated mere puddles on private land as “navigable waters.”

The USDA press office said in an email, “We don’t comment on pending litigation.”