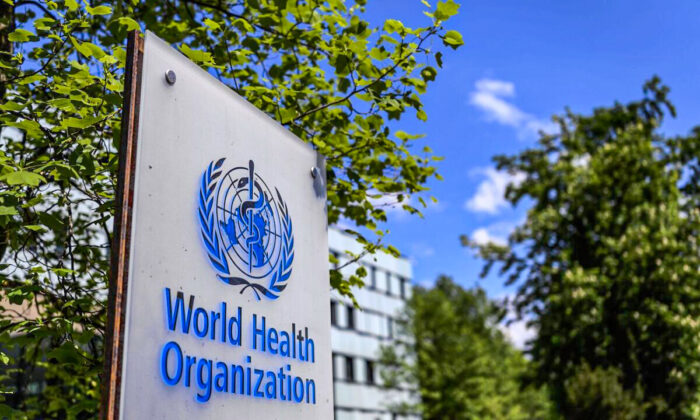 A sign of the World Health Organization in Geneva, Switzerland, on April 24, 2020. (Fabrice Coffrini/AFP via Getty Images)
Policies & Impacts

U.S.-proposed amendments to the international health regulations which govern response to pandemics and the new global pandemic treaty, both on the agenda of the World Health Organization’s general meeting, pose a threat to countries’ sovereignty, said journalist and author Nick Corbishley.

The amendments proposed in January by the Biden administration will give the Director-General of the World Health Organization (WHO) unilateral authority to declare a public health emergency in any nation based on whatever evidence the director chooses.

The WHO’s International Health Regulations were introduced in 2005 and were “stimulated a bit by the SARS outbreak in 2003, Dr. David Bell, an expert in global health and infectious disease who previously worked at the WHO, told EpochTV’s  “American Thought Leaders” program.

The 13 amendments put forward by the Biden administration were on the agenda of the 75th World Health Assembly held last week in Geneva, Switzerland. The World Health Assembly is the decision-making body of the WHO and is attended by delegations from all member states, according to the organization’s website.

The assembly also started deliberation on what the newly proposed global pandemic treaty might include.

The global pandemic treaty is a parallel mechanism of the WHO. It will have force under international law and is very similar to the International Health Regulations’ amendments, but it will give far more power to the WHO and its director-general, Bell said.

Corbishley believes that the assembly will focus more on compliance of WHO member states with regulations adopted by the organization. The Biden administration mentioned setting up a compliance committee that will ensure that WHO participants follow its regulations, Corbishley told EpochTV’s “Crossroads” program.

Currently, the WHO “only has an advisory role. It’s only able to make recommendations to member states and it is up to the participating nations to decide whether and how they implement those recommendations,” Corbishley explained. “That is likely to change if there is a global pandemic treaty. ”

He pointed out that the concept of a compliance committee if implemented, will be “almost like to police the actions of each member state.

“The countries that are most at risk of losing the most sovereignty in this sort of scenario are likely to be poorer, smaller countries.”

Similar cases have been observed within the last 15 to 20 years in the World Trade Organization, where global corporations can sue national governments in an international court for infringing on their profits or even threatening their future profits, Corbishley said. “It hits poor countries, smaller countries much more because they don’t have the money to be able to pay off these kinds of lawsuits.”

“They don’t have the diplomatic clout on an international level to be able to resist these things.”

Every country that signs on to the pandemic treaty instituted by WHO will lose some degree of sovereignty, but it is hard to tell to what extent because the treaty is at the beginning of its development, Corbishley said.

“If [the WHO] does gain the power to declare a public health international emergency in a country without even consulting or reaching an agreement with the state in question, then that is a massive shift in the power balance between states and a supranational organization like the World Health Organization,” Corbishley said.

If the treaty can enforce a certain amount of compliance on states in the area of public health policy, a new trend of the “balkanization of globalization” could begin, Corbishley noted. “Globalization is beginning to look a lot more fragile than it did five to 10 years ago.”

For example, Russia, which has a large population and a reasonably large economy, recently floated the idea of withdrawing from WHO, he said. Although Corbishley doubts that the United States or the European Union will oppose the treaty, if some other big countries start expressing their concerns that the treaty is not in their interest, “then it could become impractical as a document,” he pointed out.

An initial working document toward this global pandemic treaty is called the zero draft report and it was also on the agenda of the last World Health Assembly, Bell said. The treaty is supposed to be discussed and agreed at the World Health Assembly that will convene next year and would then come into force upon ratification by the participating countries, he added.

To adopt the treaty, two-thirds of WHO members have to agree, while amending the existing international health regulations requires approval by only half of the participating countries, Bell said.

There are no clear proposals for the global pandemic treaty because the work on the draft has just started, Corbishley said, adding that some draft documents could be available in August.

Private Funding of WHO

The WHO is influenced by the countries which comprise its assembly and by the private and corporate donors who fund a lot of its programs, Bell said. “So it responds to those who directed.”

“It certainly is pushing a very new way of managing health and of managing decision making in health, particularly in outbreaks, that is clearly to the advantage of these donors of WHO,” Bell explained.

He also noted that there is a possibility that countries would take advantage of this whole situation to further their strategic interests over the interests of rival countries. “The world is a diverse place. Not all countries agree with each other.”

About 80 percent of funding for the WHO, comprised of 194 member states, comes from private companies and private foundations such as the Bill and Melinda Gates Foundation—the second largest overall contributor after Germany. The United States is the third-largest contributor.

Germany, the top donor to WHO, is also the biggest exporter of pharmaceutical products in the world, Corbishley pointed out. Moreover, the WHO has a contract with T-Systems, a subsidiary of German company Deutsche Telekom AG, to build a global interoperable system of vaccination passports, according to a company statement.

Considering “how pharmaceutical companies have managed to capture—to a certain extent or to a great extent—our governments and regulatory bodies and academia,” it begs the question: “to what extent [is the WHO] reflecting the interests of the global public, and to what extent do they represents the interests of the pharmaceutical companies that whether directly or indirectly through their the member states are funding the WHO,” Corbishley said.

He also encourages people on the left or the center of the political spectrum to pay more attention to the amount of private funding the WHO receives. Right now it seems people on the right are deeply concerned about how giving more powers to the WHO might pose a threat to sovereignty, Corbishley noted.

Jan Jekielek and Mark Tapscott contributed to this report.