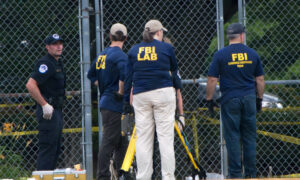 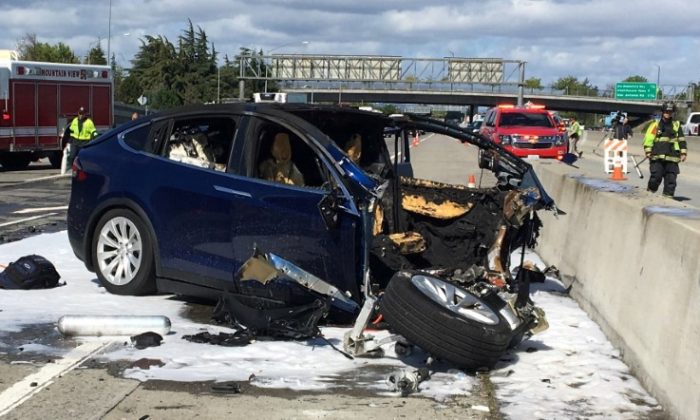 FILE PHOTO: Rescue workers attend the scene where a Tesla electric SUV crashed into a barrier on U.S. Highway 101 in Mountain View, California, Mar. 25, 2018. (KTVU FOX 2/via REUTERS)
US News

The family of a driver killed in a Tesla car crash has hired law firm Minami Tamaki LLP to explore legal options, the law firm said on Wednesday, adding that the Autopilot feature in the electric carmaker’s vehicle probably caused his death.

Walter Huang died in a crash and vehicle fire in a Tesla Inc Model X near Mountain View, California, last month, prompting investigations by the National Highway Traffic Safety Administration and National Transportation Safety Board (NTSB). The agencies are also investigating the battery fire that followed the crash.

Tesla later said the car had activated Autopilot, raising new questions about the semi-autonomous system that handles some driving tasks. The company said vehicle logs from the accident showed no action had been taken by Huang before the crash and that he had received warnings to put his hands on the wheel.

The NTSB confirmed on Wednesday that it has two other pending investigations of other Tesla crashes, including a probe of an August 2017 Tesla battery fire in Lake Forest, California, that occurred after an owner lost control and ran into his garage. That fire probe had not previously been reported.

“We’re really more looking at the fire aspects,” NTSB Chairman Robert Sumwalt told Reuters, saying that the battery continued to ignite even after it was loaded onto a truck.

The NTSB previously said it also is probing an incident in which a Tesla vehicle apparently traveling in semi-autonomous mode struck a fire truck in California in January.

The law firm said its preliminary review suggested the autopilot feature was defective and had uncovered complaints by other Tesla drivers of navigational errors by the system.

“(Our) preliminary review indicates that the navigation system of the Tesla may have misread the lane lines on the roadway, failed to detect the concrete median, failed to brake the car, and drove the car into the median,” Minami said.

While sympathizing with the family, Tesla again blamed Huang, saying he was well aware that Autopilot was not perfect and, specifically, he had told them it was not reliable in that exact location, but nonetheless engaged Autopilot.

Tesla said the system always reminds drivers to be alert and have hands on the wheel and had warned Huang several times on the day of the crash to do so.

“The crash happened on a clear day with several hundred feet of visibility ahead, which means that the only way for this accident to have occurred is if Mr. Huang was not paying attention to the road, despite the car providing multiple warnings to do so,” a Tesla spokesperson told Reuters.

By Munsif Vengattil and David Shepardson