Family Members All Enjoy Their Shen Yun Experience in Atlanta 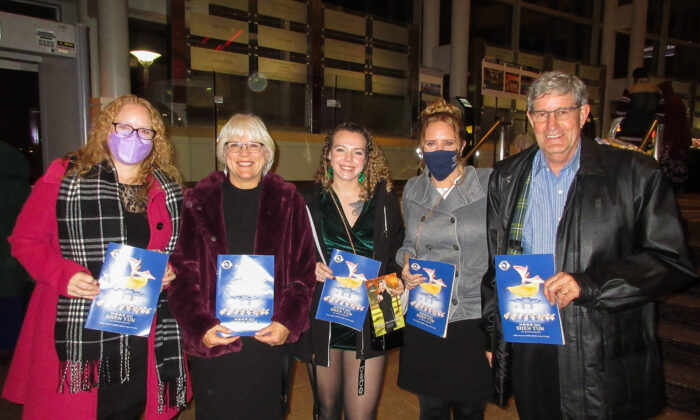 Mr. Gearhart, who works in the financial section for AGCO, a farm equipment company, read about the New York-based Shen Yun company coming to Atlanta and got the family to come. He was very impressed with the performance.

“I really liked the orchestra—very good. I thought the background and the way they were interactive, enabled to more or less make the stage larger with the background interaction,” he said.

“I just love the singers and the instruments. It was just beautiful,” Amanda added, referring to the soloists in the performance.

Mrs. Gearhart loved the music and especially the dance stories which both she and Heather called “powerful.”

Mrs. Gearhart mentioned how interesting it was for her to see the mini-drama showing the courage of people of faith in China nowadays when confronted by communism. Shen Yun depicts in a couple of dances about the more recent persecution of the spiritual group, Falun Dafa,

Heather noted that this storytelling, through music and dance, was just phenomenal.  “The heartbreaking story about the father—that was awfully sad. [The emcees] said this is still going on! And so it’s good for people to be aware of that.”

Regarding the pandemic and some folk being worried about going to theaters, Mr. Gearhart said: “I guess I’m a little less afraid than a lot of people about that. It was well worth coming to.”

I think it it’s always very important to experience the arts and different cultures and it really enhances your mental state, your well-being.
— Heather Gearhart

Heather added: “I think it it’s always very important to experience the arts and different cultures and it really enhances your mental state, your well-being.

“And I also think that even though there’s a lot of things going on in the world right now and that people are scared to come out and experience it, you can still do it while being safe—so I think it’s worth it!”

Mrs. Gearhart also appreciated the “calming feeling and beautiful well-being” she experienced during the performance.