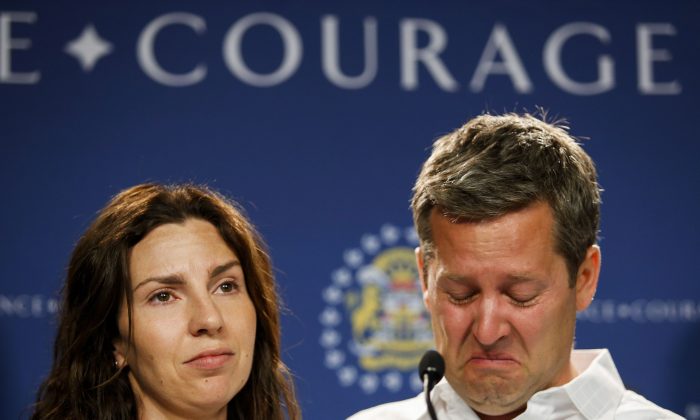 Rod and Jennifer O'Brien show their emotions as they speak to the media about their son Nathan O'Brien and his grandparents Alvin and Kathryn Liknes during a press conference in Calgary on July 2, 2014. (The Canadian Press/Jeff McIntosh)
Canada

CALGARY—Five-year-old Nathan O’Brien has been such a fan of superheroes, his mother says she hasn’t had to buy him clothes, just costumes.

Nathan’s parents urged the youngster to be a superhero again Wednesday as police frantically searched for him and his two grandparents, who disappeared under suspicious circumstances in Calgary earlier this week.

“Nathan, I need you to hear my voice right now and I need you to know that Mommy and Daddy love you more than anything in this world,” Jennifer O’Brien said through tears at a news conference organized by police.

“Stay strong, Nathan. We know you are our superhero and I just need you to stay strong and we are going to see you.”

The oldest of three boys, Nathan was reported missing Monday after his mother went to pick him up from a sleepover at her parents’ house in a neighbourhood near downtown Calgary.

Alvin Liknes and his wife Kathy were planning to move to a new home in Edmonton and then to Mexico. They were selling their things as they downsized.

Nathan and his mother helped with the sale on Sunday. O’Brien says her son, always a friendly chatterbox, would remind his grandmother to say “thank you” when she sold something to one of the many people who passed through the home.

Police say the mother left the home at 10 p.m. When she returned 12 hours later, everyone was gone.

Police were called and an Amber Alert issued, but the three have not been heard from since.

“We can’t be with you right now, but the best people who can be with you other than us are your grandparents,” O’Brien said at Wednesday’s news conference. “I know Grandma is holding you so tight right now, and they are doing everything in their power to keep you safe.”

Investigators say they don’t believe the three left the home voluntarily. But homicide unit Staff-Sgt. Doug Andrus said officers have no suspects and don’t know why anyone would have taken the trio.

The house, a grey-blue split-level, was surround by police tape Wednesday. A steady stream of officers went in and out of a door still sporting a poster advertising the estate sale.

Police have said there are no custody issues with the family—the boy’s parents are married and he is their biological son.

Police have also said officers have no history with the family.

Since the Amber Alert was issued, Andrus said more than 100 tips have come in. Six detectives and 80 officers have been working on the file.

Faint, reddish-brown streaks featured in TV shots along the side of the home were being tested by forensic crews, Andrus said, but had yet to be ruled as significant.

Police were asking anyone who bought items in the sale to bring pictures to a community centre on Thursday so they could get a better sense of what items were sold.

The family considered offering a reward, but police have suggested that might not be helpful at this point in the investigation.

Nathan is described as three feet tall, with curly blond hair and brown eyes. He was last seen wearing peach-coloured shorts and a blue-striped hoodie.

Alvin Liknes is six feet tall, 200 pounds with grey and blond hair and was wearing black shorts. He has a distinctive walk. Kathryn Liknes is five-foot-three, 120 pounds with reddish-brown hair and green eyes.

Nathan’s father, Rod O’Brien, made an emotional appeal for his son’s return.

“Whoever has Nathan, please find it in your heart to drop off our little angel Nathan (so) he can be rescued and reunited with his brothers and his family.”