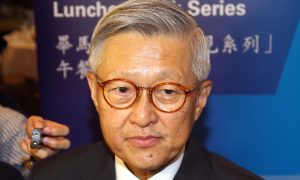 The information sites are for raising awareness about the persecution of Falun Gong, a traditional spiritual practice, and demanding that the Chinese Communist Party (CCP) stop the persecution. The FEHD has been illegally confiscating banners and placards from Falun Gong information kiosks since April.

Practitioners Chee Fei-ming and Hung Shui-fung applied for judicial review on April 23 and July 18 respectively. They aim to challenge the unlawful interference by the FEHD and the Department of Justice.

Kan Hung-cheung, a spokesperson of the Hong Kong Falun Dafa Association, said that the practitioners are applying for judicial review “to uphold the legal rights of Hong Kong people and Falun Gong practitioners, and to fight for righteousness and for our conscience.”

A one-and-a-half-hour hearing was held at the High Court on December 4 for both applications. The judge ordered an additional two-day hearing on April 3 and 4 next year.

On April 24 this year, FEHD personnel were sent to Hung’s kiosk next to the Sham Shui Po Mass Transit Railway station exit and forcibly confiscated banners and placards. Also in April, Chee’s kiosk on Argyle Street was raided by the FEHD.

The two applicants hope the court will rule the FEHD’s actions as illegal, order the return of all the confiscated banners and placards, and provide compensation. Hung and Chee have also applied for an interim injunction to let them continue displaying banners and placards without intervention from the FEHD until otherwise decided.

On the day of the hearing group of Falun Gong practitioners organized a march from Chater Garden to the High Court at Admiralty to show solidarity with the applicants. Outside the High Court, they held a demonstration.

Hung said that since the persecution of Falun Gong started in 1999, practitioners are obliged to expose the facts to the public about the CCP’s inhuman crimes against Falun Gong.

He added that ever since Hong Kong Chief Executive Leung Chun-ying has been in charge, he has incessantly interfered with Falun Gong kiosks using the FEHD and the CCP-affiliated Hong Kong Youth Care Association.

In over ten years of persecution, Hung explained, the peaceful gatherings of Falun Gong practitioners to expose the persecution have been reasonable, lawful, and within the rights stipulated in the Hong Kong Basic Law.

Since the CCP began suppressing the practice, Hong Kong Falun Gong practitioners have set up over 20 information kiosks. Hui Kwok-hung, another practitioner who is assisting with the legal process, said that these practitioners are exercising their freedom of speech and assembly provided by the Basic Law.

“We have been using public places for peaceful assembly,” Hui said. “In doing so, we did not cause any unreasonable obstruction to users of the public places. Therefore our assemblies and the display of our banners and placards are legitimate.”

Hui said that the Hong Kong Youth Care Association began to disrupt Falun Gong information sites one and a half years ago, and they have continued to do so because the police have failed to keep public order in accordance with the Public Order Ordinance. They have also allowed the FEHD to illegally require advance application for practitioners to display a banner.

“We have always believed that the FEHD’s actions are in violation of articles 27 and 39 of the Basic Law, and sections 15, 16 and 17 of the Bill of Rights. Hence the FEHD’s removal of our banners is unlawful,” Hui said.

He added that he has questioned the FEHD about this many times before, but the FEHD have not stopped their illegal actions. This is another reason for the application for judicial review, he explained.

Hung Shui-fung said, “We hope the judge at the High Court will understand and uphold justice, stop the [FEHD] squad from interfering with our normal truth-clarification activities, and compensate all our losses.”

Chee Fei-ming, the other applicant, said that she hopes Hong Kong can continue to keep its core values of human rights, rule of law, and freedom.