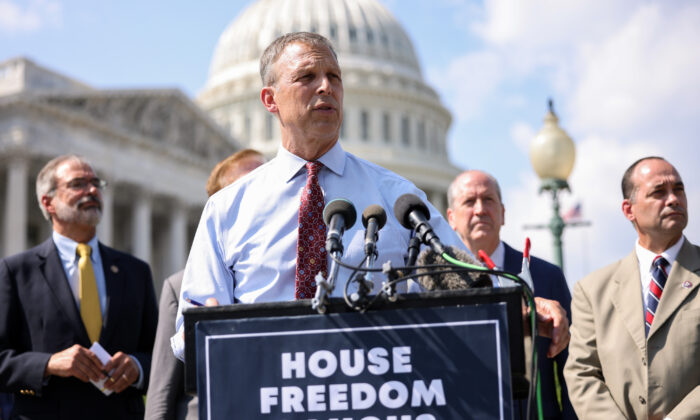 Rep. Scott Perry (R-Pa.), joined by members of the House Freedom Caucus, speaks at a news conference on the infrastructure bill outside the Capitol Building in Washington, on Aug. 23, 2021. (Kevin Dietsch/Getty Images)
China Human Rights

A peaceful gathering of about 10,000 religious adherents in communist China more than two decades ago “continues to give courage to millions around the world” who seek an end to Beijing’s repression, Rep. Scott Perry (R-Pa.) said on April 21.

Perry was referring to an appeal by adherents of the spiritual group Falun Gong at the Chinese Communist Party’s (CCP) headquarters in Beijing in 1999, describing it as the “largest peaceful protest in modern Chinese history.”

The adherents were appealing for the release of around a dozen practitioners who had been arrested days earlier and for authorities to lift their suppression of the spiritual practice.

“The bravery of the Falun Gong that day continues to give courage to millions around the world who believe in and yearn for an end to CCP repression,” Perry said in a statement to NTD, an affiliate of The Epoch Times.

Perry’s statement came days ahead of the peaceful appeal’s 23rd anniversary, when overseas Falun Gong practitioners will gather in cities and towns around the world to commemorate the event and protest the CCP’s ongoing persecution of the faith group.

Falun Gong, also known as Falun Dafa, consists of five meditative exercises and moral teachings focused on the core values of truthfulness, compassion, and tolerance. It gained popularity in China during the 1990s, with estimates putting the number of adherents at 70 million to 100 million by the end of the decade.

“The People’s Republic of China soon began to view the intense popularity of this non-party movement as a threat to its control of the country,” Perry said, referring to the official name of the Chinese regime.

In July 1999, the CCP launched a sweeping persecution campaign seeking to eliminate the practice.

“Since its inception one hundred years ago, the Chinese Communist Party has dedicated itself to the promotion of a murderous, cultural Marxism that has contributed to the deaths of tens of millions of innocent people,” Perry said.

By nightfall on April 25, 1999, the gathered adherents had left the CCP compound, after receiving news that the arrested practitioners had been released and assurances from then-Premier Zhu Rongji that Falun Gong could be practiced freely. Many thought the matter had been resolved.

But three months later, the CCP, led by then-General Secretary Jiang Zemin, initiated what has become one of the longest-running persecutions against a faith group in China. Perry described this move as the act of “malfeasant cowards.”

Since the launch of the persecution, millions of adherents have been detained in jails, detention centers, and labor camps, where they’ve been subjected to torture, organ harvesting, and other forms of abuse, according to the Falun Dafa Information Center. Some experts have characterized the CCP’s campaign against Falun Gong as a genocide.

The Epoch Times previously reported that even while trying to contain the pandemic in China, the communist regime has continued to persecute Falun Gong adherents, according to a leaked internal document.

According to a report from Minghui.org, a U.S.-based website that tracks the persecution of Falun Gong in China, 5,886 arrests and 10,527 cases of harassment of practitioners were confirmed in 2021.